In the Christian Quarter of the Old City of Jerusalem, a stone’s throw from the Church of the Holy Sepulcher, is the Church of the Redeemer. Built by Kaiser Wilhelm in the late 1800s, he personally dedicated the church in 1898, when he and his wife, Augusta Victoria, became the first western rulers to visit Jerusalem. The white stone tower of Redeemer is one of Jerusalem’s tallest landmarks and can be used to help orient you when in the Old City.

Today, the Church of the Redeemer houses several Lutheran congregations, speaking four different languages (Arabic, German, English, and Danish), as well as the Offices of the Bishop of the Evangelical Lutheran Church in Jordan and the Holy Land (ELCJHL), Bishop Sani Ibrahim Charlie Azar.

At 9:00 am the Redeemer church bells ring with full, melodic tones heard throughout the Christian Quarter. There are two simultaneous services every Sunday morning at 9am: one presented in Arabic and the other in English. The German service starts at 10:30 am. On special occasions, such as Christmas or Easter, the congregations join together for a multilingual service. For more information about the different worshipping communities, please click the links below. 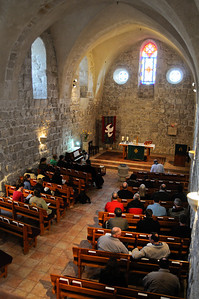 A History of the Redeemer Church and Property

The church building itself and the land on which it stands have a long and interesting history. Redeemer is built on the site of the medieval church of St. Mary la Latine, which fell into ruin. Nearby, there is said to have been a hospice (hostel) for western pilgrims, near the place of Jesus’ death and resurrection.

After the 11th Century, it becomes possible to describe a more precise history of the church and its land. Pilgrims from Italy revitalized the Convent of St. Mary la Latine before 1070, and a hospital was established near the Church of St. John. The buildings were part of an enormous religious complex called the Muristan, from the Persian word for ‘hospital.’

When the Crusaders were the administrators of Jerusalem during the twelfth century, the religious brothers who served in the hospital founded one of the three great orders of knights, the Order of the Knights of St. John. They cared for the pilgrims who visited Jerusalem, many of whom became ill and needed nursing. Thus, the knights also became known as “hospitallers.” From 1099-1187 the Muristan was the headquarters of the Knights of St. John, featuring several churches and hospitals. It is reported that at times there were up to 2000 patients with hundreds of nursing brothers caring for them.

When the Turkish ruler, Saladin, conquered Jerusalem in 1187, the hospital continued as an Islamic institution, but by the sixteenth century the Muristan fell into ruins. The City of Jerusalem and its churches were all but forgotten by the West. In the beginning of the nineteenth century, however, pilgrims began coming once again to Jerusalem. By 1840, European nations and churches wanted to be represented in Jerusalem.