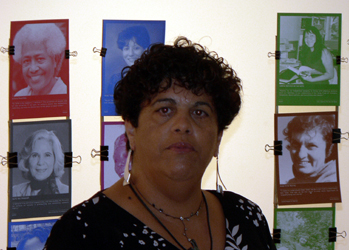 On Saturday, October 21, an exhibition entitled “1000 Peace Women Across the Globe” was opened at the International Centre of Bethlehem by Nabila Espanioly, one of the nominated women and the director of the women’s center ‘Al Tufula’ in Nazareth in Israel.

The exhibition includes photographic portraits of the 1000 women from over 150 countries around the world who were nominated jointly for the Nobel Prize for Peace in 2005. Amongst the 1000 ‘Peace Women’ are eight Palestinian women from the occupied Palestinian territories (Hanan Ashrawi, Amneh al-Rimawi, Nafeesa ad-Dik, Issam Abdul-Hadi, Zahira Kamal, Salma Jayyusi, Amneh Suleiman and Yusra Berberi) and three Palestinian women from inside Israel, including Nabila Espanioly.

The 1000 women did not win the 2005 Nobel Peace Prize but they did gain global recognition and their work continues to be publicized around the world in exhibitions such as this. The documentation of their lives and work serves as a body of information that can assist campaigners and the pubic for years to come. The 1000 women continue to coordinate and cooperate through their global network.

The documentary ‘1000 Women and a Dream’, which charts the path of the 1000 Peace Women project, was also screened at the opening. One of the nominated Palestinian women, Nafeesa ad-Dik, appears in the documentary, demonstrating how she fights for the rights of education for girls in her West Bank village, takes part in the Friday demonstrations at Bil’in against the Israeli occupation’s annexation of Palestinian land through the construction of the Separation Wall, and has spearheaded income-generation projects for women in her village through the production and sale of traditional Palestinian embroidery. Another woman featured in the documentary is Dr. Ruchama Marton, the founder of the Israeli non-governmental organisation Physicians for Human Rights-Israel (PHR) that fights for the right to health, particularly in the occupied Palestinian territories. In the film, viewers see PHR assisting a 4-year old Bedouin girl from the Negev get proper medical care for the lymphatic cancer she is suffering from.