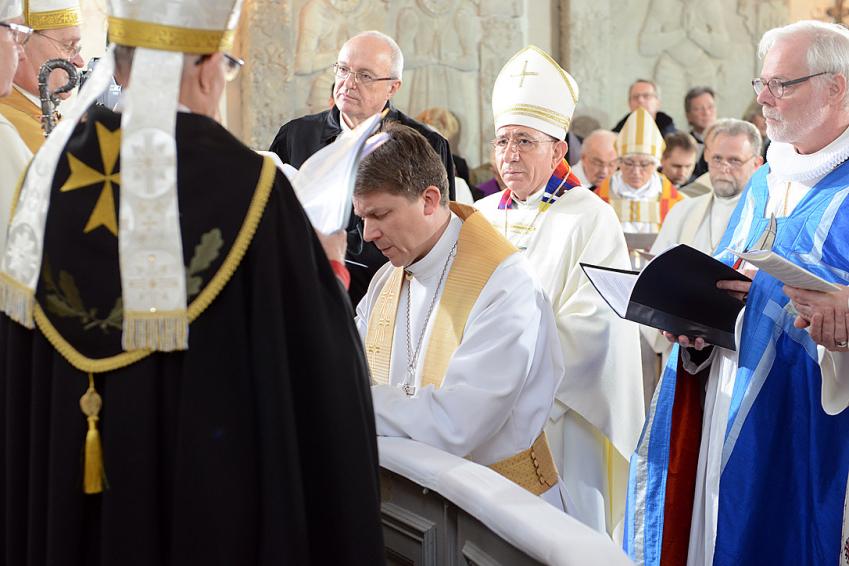 “Carrying the Cross Together”

(LWI) – The Lutheran World Federation (LWF) President Bishop Dr Munib A. Younan concluded his first official visit to the Baltic churches with emphasis on the interdependence of all churches that make up the global LWF communion.

Highlights from his 26 January – 4 February visit to Lithuania, Latvia and Estonia included the consecration of Archbishop Urmas Viilma of the Estonian Evangelical Lutheran Church (EELC), who has succeeded retiring Archbishop Andres Põder.

The LWF area secretary for Europe Rev. Dr Eva-Sibylle Vogel-Mfato accompanied the president during the visit to the three countries.

The LWF president told the new EELC archbishop his consecration provides an opportunity for Lutherans worldwide to reflect on the importance of communion for Christian churches. “As a communion of churches, we are interdependent,” Younan said.

Societies throughout the world, including Estonia, are changing rapidly therefore it is deeply important for churches to offer leadership, not only in their own interests, but for the whole of society, Younan said.

“The interdependence of our global communion and the broad web of ecumenical (and even interreligious) relationships we enjoy can be a source of great encouragement and strength,” Younan emphasized. Invited church leaders at the consecration included LWF regional Vice-Presidents Hungarian Bishop Dr Tamás Fabiny and Church of Norway Presiding Bishop Helga Haugland Byfuglien.

Together with Bishop Mindaugas Sabutis, head of the Evangelical Lutheran Church of Lithuania, Younan visited diaconal projects, including an orphanage, run by congregations in Sakiai and Jurbarka in the western part of the country. “It is important that the church is present at the grassroots of people’s lives, and serves their real needs. We are called to be a prophetic church, to be a church that sees the reality and acts,” he said, during discussions with staff serving the community, which is plagued by high unemployment.

Younan also met President Dalia Grybauskaitė of Lithuania, and both leaders discussed peace building and humanitarian work around the world, the role of religious leaders in peacekeeping and ecumenism in Lithuania.

His message during a service at the Vilnius Lutheran Church emphasized trust and faith in God during times of tribulation such as human rights violations.

“You have been half a century under oppression in Lithuania; churches were destroyed or used by others. But you kept faith in God the savior. You kept Lithuania on pilgrimage with the Lord,” the LWF president said, referring to church persecution in the former communist rule in the region.

Latvia: Carrying the Cross Together in Mission

In meetings with Archbishop Janis Vanags and other leaders of the Evangelical Lutheran Church of Latvia (ELCL) in Riga, Younan noted that “diakonia is not to be separated from mission. It is part of what we call holistic mission. Love in practice is feeding the hungry.”

During a dialogue with pastors, Younan responded to a question about the LWF’s greatest joy over the past few years by declaring: “In my travels, I find deep roots of faithfulness to the mission of God in every church. There are many joys in the communion, I am proud to be serving it.”

In a meeting with the association of women theologians in the ELCL, Younan referred to the LWF Gender Justice Policy. He emphasized the document was adopted [in 2013] for the whole LWF communion and its member churches, and it serves as an invitation to discern together on issues such as women’s ordination.

The LWF president concluded his visit to Latvia with a Sunday worship sermon at Riga’s St John’s Church on 1 February. He referred to the ongoing task of articulating the confessional identity of Lutheran churches, which is a collaborative endeavor in the context of the LWF communion. “We are carrying the cross together. We are in mission and diakonia together. Although we may have differences, together we are faithful for the gospel,” Younan emphasized.

To read this article in its original format, you can visit the Lutheran World Federation’s website.