The WCC exploratory delegation visited the congregations, schools and educational ministries of the ELCJHL, as well as ecumenical and interfaith partners during their January visit. In the photo to the left, the delegation is pictured with with Mr. Simon Awad, director of the Environmental Education Center in Beit Jala, one of the Educational Programs of the ELCJHL. Photo © ELCJHL/Rev. Rolf Pearson.

JERUSALEM/GENEVA, February 23, 2011 – The World Council of Churches (WCC) announced today that the Evangelical Lutheran Church in Jordan and the Holy Land (ELCJHL) has been accepted as a member of its ecumenical body—the largest body of its kind in the world.

The strong diaconal, ecumenical, and interfaith work of the ELCJHL was the basis for its consideration. The WCC Central Committee, now meeting in Geneva, voiced their decision unanimously. The decision was a rare measure, as it made use of the constitutional clause in dispensing with the usual membership requirements relating to small size of the church based on “exceptional reasons” of profound social and ecumenical involvement.

The announcement of the acceptance into membership was met with joy by Bishop Munib Younan of the ELCJHL, who responded, saying:

“We are overjoyed at the unanimous acceptance of our church into the World Council of Churches. No church can be independent; all of us are interdependent. As a new member of the WCC, we are proud to be part of an Ecumenical Communion that demonstrates in its very being the interdependence and interconnectedness of our individual church bodies, working in conjunction both locally and throughout the world. Our church is excited to discuss with the WCC what witness we can continue to offer together for ecumenism, justice and reconciliation, and interfaith dialogue.”

The decision came following a WCC exploratory delegation visit to the ELCJHL January 26-30, 2011. During its visit, the delegation visited many of the ELCJHL congregations, schools and educational programs, as well as numerous ecumenical and interfaith partners.

Included in the program were visits to three of the four ELCJHL k-12 Schools, four of the six congregations, and five educational programs. 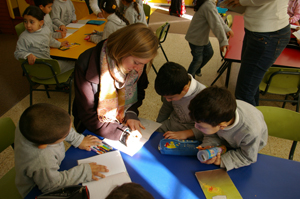 Visits with students, teachers, administrators, principals, and pastors offered the delegates a portrait of these vibrant ministries and a deeper understanding of the effects of the current situation on young people. The ELCJHL lives out a holistic philosophy and outreach to diverse Christian and Muslim families, and the impact of Lutheran education in Palestine is indeed profound.

The ELCJHL was also eager to introduce the WCC delegation to the many ecumenical and interfaith organizations and programs in which it takes an active leadership role.

During the three-day program, the delegation met with representatives of the Patriarchs and Heads of Local Churches in Jerusalem. In the delegation’s meeting with the Greek Orthodox Patriarch of Jerusalem, Theophilus, they heard of the importance of the ELCJHL as one of the main pillars of the ecumenical fellowship. And, again, in their meeting with His Beatitude Fouad Twal, the Latin Patriarch of Jerusalem, Twal spoke of the ELCJHL as being a “crucial witness of the Palestinian presence in the region.”

And, in addition, the delegation met with local programs in which the ELCJHL plays an instrumental role, including the Jerusalem Interchurch Center (JIC), and the Ecumenical Accompaniment Program in Palestine and Israel (EAPPI), both of which are programs of the World Council of Churches (WCC).

This strong diaconal, ecumenical and interfaith work of the ELCJHL was evident throughout the delegation’s visit, and was a strong recommendation for the small but vibrant church’s membership in the WCC.

The unanimous reception of the ELCJHL into membership in the World Council of Churches comes as one of many recent affirmations of the work and witness of the ELCJHL, including the election of Bishop Younan as President of the Lutheran World Federation this past July.

Click on the highlighted links for more information on the congregations, schools and educational programs of the ELCJHL, click here.