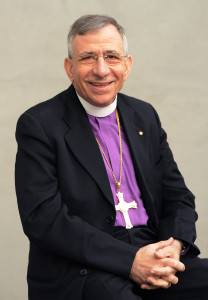 Bishop Emeritus Younan was educated in Palestine and Finland and has been active in numerous faith organizations since his ordination in 1976, such as the Middle East Council of Churches (MECC), The Lutheran World Federation (LWF), and the Fellowship of the Middle East Evangelical Churches (FMEEC). Bishop Younan was the first to translate the Augsburg Confession, a key document of the Lutheran Church, into Arabic.

He is an active member of various ecumenical and interfaith dialogue initiatives in Jerusalem that he helped found. His interfaith work has been recognized with several awards and prizes, the most recent being the Sunhak Peace Prize in 2019.

Bishop Emeritus Younan is the former President (2010-2017) of the Lutheran World Federation (LWF), a global communion of Christian churches with 148 member churches in 99 countries representing more than 75.5 million Christians. A major highlight during his time as President of the LWF was the 500th Anniversary of the Reformation and the Joint Catholic-Lutheran Commemoration of the Reformation in Lund and Malmö in October 2016.

He is past president of FMEEC and provides leadership for the ecumenical Patriarchs and Heads of Local Christian Churches in Jerusalem, as well as for the Council of Religious Institutions in the Holy Land (CRIHL), comprised of leaders of Jerusalem’s Jewish, Muslim and Christian communities. His term as acting bishop of the ELCJHL was from December 1998 – January 2018.

Bishop Emeritus Younan is the author of Witnessing for Peace: In Jerusalem and the World (Augsburg Fortress, USA, 2003), Our Shared Witness: A Voice for Justice and Reconciliation (Lutheran University Press, 2012), and of The Augsburg Confession in Arabic (Emerezian Est., Jerusalem, 1993).  Younan also has written numerous articles, lectures, and presentations relating to the life of Palestinian Lutherans in the Middle East.

He continues to serve the ELCJHL as a member of the Church Council.

Bishop Emeritus Younan can be reached at myounan@elcjhl.org or munib.younan@icloud.com

His biography and Curriculum Vitae and a downloadable photo can be found below
Downloadable photo
Toolbar appears on hover, at top and bottom of PDF
Munib-Younan-CV-2019