Compared with other churches in the Middle East, the history of the Evangelical Lutheran Church in Jordan & the Holy Land (ELCJHL) is very recent, but still rich in the culture and traditions of Palestine.

The ELCJHL traces its origins to the middle of the 19th century, when German and English Evangelical Protestant Christians came to Palestine to support the Christian minority in the area through diaconal and mission work. They channeled their many activities through a variety of organizations and institutions.

The initial phase of the Lutheran mission effort began in 1841, when a joint British Anglican and Prussian Evangelical diocese was established in Jerusalem. In 1851, Theodor Fliedner of Kaiserswerth was invited to bring four deaconesses to the Holy Land in order to begin a hospital. Four years later, a school for girls, Talitha Kumi, was established. This was the first school to offer girls a proper education in the Holy Land.

In 1860, Johann Ludwig Schneller founded the Syrian Orphanage in Jerusalem. His institution cared for orphaned Arab children and provided them with top-quality academic and vocational education. (This orphanage was later moved to the Bekaa Valley of Lebanon and is operated by the Lutheran World Federation.)

The Anglicans and Lutherans worked together as one body until 1886, when the Prussian Lutherans went their own way, partly due to political and theological differences between Prussia and England. The German Lutherans focused their efforts on social work and education, while the British Anglicans prioritized conversion. Today the ELCJHL continues this call to witness through education and health care for Palestinians regardless of faith, while also providing for the spiritual needs of the Arab Lutheran community.

The original aim of these Protestant mission efforts was not to create a new church in the area, but to serve the poor and provide quality education for Christians. Only later did the former pupils of the Lutheran Schools help to establish the local Evangelical Lutheran Church. Many of these members became refugees at the time of the creation of the State of Israel.

During the 1970s, the ELCJ began to make its way toward independence, as Lutherans worldwide focused on “church to church” relationships rather than “church to mission field” relationships. In 1979 the German Propst transferred spiritual leadership to the first Palestinian Bishop, the Rev. Dr. Daoud Haddad, who had been vicar of the Jerusalem congregation for more than 30 years. In selecting Rev. Dr. Haddad, the ELCJ had elected the first Arab Lutheran bishop in the whole Middle East. The election of a Palestinian as bishop proved to be very important as the ELCJ took its place among the churches of the region. The tenure of the Bishops of the Church is as follows:

On 14 January 2005, The ELCJ Synod met and unanimously decided to add “and the Holy Land” to our name, so that the name more accurately reflects the full scope of the ministry of the Lutheran church that is serving in Jordan, Palestine, and Israel.

Congregations of the ELCJHL are located in Jerusalem, Bethlehem, Beit Jala, Beit Sahour, Ramallah, and in Amman, Jordan. The latter two congregations were initially established to serve refugees from the Israeli-Palestinian conflicts, especially Lutheran families who were driven from their homes in Lydda, Ramle, and Jaffa. The ELCJHL can properly be called a church of refugees and is grateful for the efforts of the Lutheran World Federation (LWF) toward Palestinian refugees since 1950.

Today, the ELCJHL operates four K-12 schools in Ramallah, Beit Jala, Bethlehem and Beit Sahour. Each year, the ELCJHL schools serve more than 3,000 students. The ELCJHL also administers three Educational Programs: the Al-Mahaba Kindergarten on the Mount of Olives, the Martin Luther Community Development Center in the Old City of Jerusalem, and the Environmental Education Center in Beit Jala.

The ELCJHL Bishop’s offices are in the Evangelical Lutheran Church of the Redeemer in the Old City of Jerusalem. Located on Muristan Road in the “Resurrection Neighborhood,” the Bishop’s offices are only a stone’s throw from the Church of the Holy Sepulchre. The ELCJHL remains a strong Christian presence in these demanding times, providing leadership in ecumenical efforts and offering both spiritual and social services to meet the daily needs of the people.

The ELCJHL has been a member of the Lutheran World Federation (LWF) since 1974 and maintains a “companion” or partner relation with many other churches worldwide. It is a member of the Middle East Council of Churches and was accepted into the World Council of Churches in 2013. The ELCJHL is active in ecumenical affairs and interreligious dialogue locally, regionally, and globally. 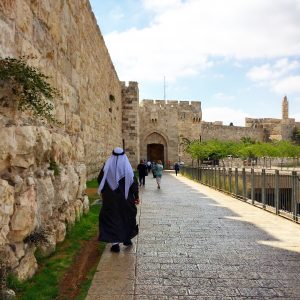 The Evangelical Lutheran Church in Jordan and the Holy Land faces many challenges in this new century. One particular concern is the emigration of many Palestinian Christians from the Holy Land. As Palestinians continue to struggle for autonomy and nationhood, they are confronted with the need for improved education, better access to health care, improved employment opportunities, stronger leadership, and a greater recognition within the international community. The ELCJHL seeks to fill these needs, while additionally providing care for the spiritual well-being of its members.

Our Mission | A Brief History