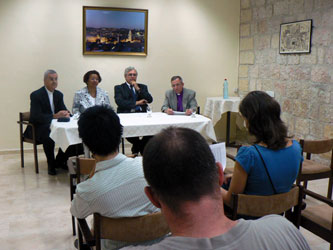 The World Council of Churches sent a three-member delegation to Lebanon and Jerusalem August 10 – August 16 whose main aim was “to manifest our solidarity to the people of Lebanon and Palestine/Israel, to meet as many representatives of Churches, Muslim and Jewish leaders, civil society and the Governments.” The delgation consisted of Ms. Marilia Schiller, programme executive of staff of the WCC; Pastor Jean-Arnold Clermont, President of the French Protestant Federation and of the Conference of European Churches; and Mgr. Bernard Aubertin, Archbishop of Tours in France, delegate of the Catholic Conference of French Bishops. In a statement released at a press conference Monday, Aug. 14, the delegation said they had also gone “to listen to the people we met, especially the leaders of the churches, to take back with us the voices of the people of Lebanon and Palestine/Israel, so that the churches we represent can speak out in their name.”

“We heard the voices of all our partners in Lebanon who couldn’t understand the violence of destruction: more than a thousand civilian victims, crimes of war against children and infants (noting particularly Qana and the Mar Jayun convoy), destruction of infrastructure – and as the Lebanese Prime Minister told us – “a Lebanon cut in pieces”. They could not understand the violence of the military offensive, except that the intention was to destroy Lebanon. We heard also the voices of the same Christian leaders in Lebanon condemning without reservation the attacks of Hizbollah which cost the lives of eight Israeli soldiers and the capture of two others, and condemning any form of violence and the killing of civilians. But the same leaders supported the resistance of the Lebanese people underlying the unity of this country as a model of multicultural and muti-confessional understanding of democracy.”