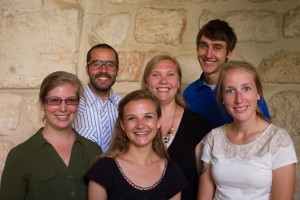 The 2013-2014 Young Adults in Global Mission (YAGM) were commissioned for their year of service. (© Danae Hudson/ELCJHL)

Bishop Munib Younan and the English-Speaking congregation of the Evangelical Lutheran Church in Jordan and the Holy Land (ELCJHL) welcomed new volunteers for a year of service in the Holy Land. The six Evangelical Lutheran Church in America (ELCA) volunteers, known as Young Adults in Global Mission (YAGM) were blessed. The YAGM work with the ELCJHL’s schools and ministries and worship with Palestinian Christians throughout Jerusalem and the West Bank. Other volunteers who were commissioned were with the Mennonite Central Committee (MCC) and Lutheran World Federation, Jerusalem Program. Bishop Munib Younan, Rev. Mark Brown, Church Council President, Rev. Jeff VonWald, Co-YAGM Coordinator, and Revs. Martin and Angela Zimmann, pastors of the English-Speaking congregation, commissioned and welcomed the new volunteers.

“We are accompanying each other with the various gifts that we have and that God has bestowed upon us,” said Bishop Munib Younan during the service. “You have come here to serve as equals with equal partners, to accompany them as they accompany you.”

“May God bless you in this very demanding, but very rewarding, experience.”

To listen to music from the service, visit the ELCJHL’s Soundcloud page.

To see photos from the service, visit our photo gallery.

All volunteers were commissioned at the English-Speaking congregation of the ELCJHL. (© Danae Hudson/ELCJHL)