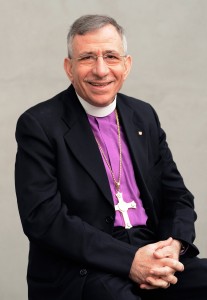 In I John 4:20-21, it is written, “Those who say, “I love God,” and hate their brothers or sisters, are liars; for those who do not love a brother or sister whom they have seen, cannot love God whom they have not seen. The commandment we have from him is this: those who love God must love their brothers and sisters also.” In the original context, the writer was reminding the early Christians that their declaration of love for God and acts of devotion to Christ meant nothing if they held their neighbors in contempt. In our modern context, we should also understand that the writer was not admonishing the Christians to merely love other Christians, but that “brothers (and sisters)” was meant to convey a needful regard for humanity itself.

In recent months we have seen a rise in the occurrence of the so-called “price tag” acts of vandalism. Since the beginning of 2013, perpetrators committed over twenty acts of vandalism at Holy Sites, including churches, mosques, and synagogues. Recently, the Church of the Dormition on Mt. Zion were prey to this sort of attack. The term “price tag” is pejorative and dehumanizing. It is meant to instill fear in the hearts of the site’s inhabitants that they will “pay a price” for remaining.

The Council of Religious Institutions in the Holy Land calls for an end to these heinous crimes of vandalism. The true price of these attacks is the weakening of our ability to peacefully coexist in the city which is bound firmly together as the house of God on earth. We cannot and will not stand idly by as these reprehensible acts are committed. When one holy site in Jerusalem is vandalized, all the people of Jerusalem, regardless of their faith or religion, suffer as a result.

Inasmuch as Jerusalem is a place where people gather from all over the world to encounter God through pilgrimage, we who inhabit this city, this Holy Land, must learn to respect the other so that we can share Jerusalem with the world in a way that enhances and encourages spiritual growth and maturity.

For me, the answer to this vexing problem is education. Do we educate our children properly regarding the religious practices of the other? Do we know how the other wishes to be understood. By educating our children about the other we build awareness about and respect for the other. We teach our children to accept and cherish the freedom of religion so all may have equal rights and access to the Holy Sites. By educating our children, we enable them to accept the diversity of our land without the demonization and dehumanization of the other, but rather an understanding that all are deserving of these common values: justice, peace, reconciliation, and acceptance of the other. Education helps one to understand that equality is the inherent right of everyone regardless of religion, race, ethnicity, social status, or gender.

Acts of violence against the holy sites are nothing more than a pitiful attempt to politicize the divine encounter between God and humanity. God is not a commodity. God is not a political pawn in a chess game over the right to occupy pieces of land. God is the Creator, and as such is the true owner of the Holy Land and the Holy City of Jerusalem. As it is written in Psalm 24:1, “The earth is the Lord’s and all that is in it, the world, and those who live in it….” When we honor God as Creator, then we honor the sites where people encounter God. When we victimize and vandalize the other, we show disrespect for God and the heart of God is sorely grieved.

Above all, we are called to be faithful stewards of the city, to venerate the holy sites of the three Abrahamic faiths, and to call to accountability those who seek to threaten the facilitators of peaceful coexistence in this community. This is how we pray in thought, word, and deed. This is faith in action. May God prosper those who work for peace based on justice, so that the world may see Jerusalem as a light to the nations where all can be witness to justice, reconciliation, and acceptance of the other.