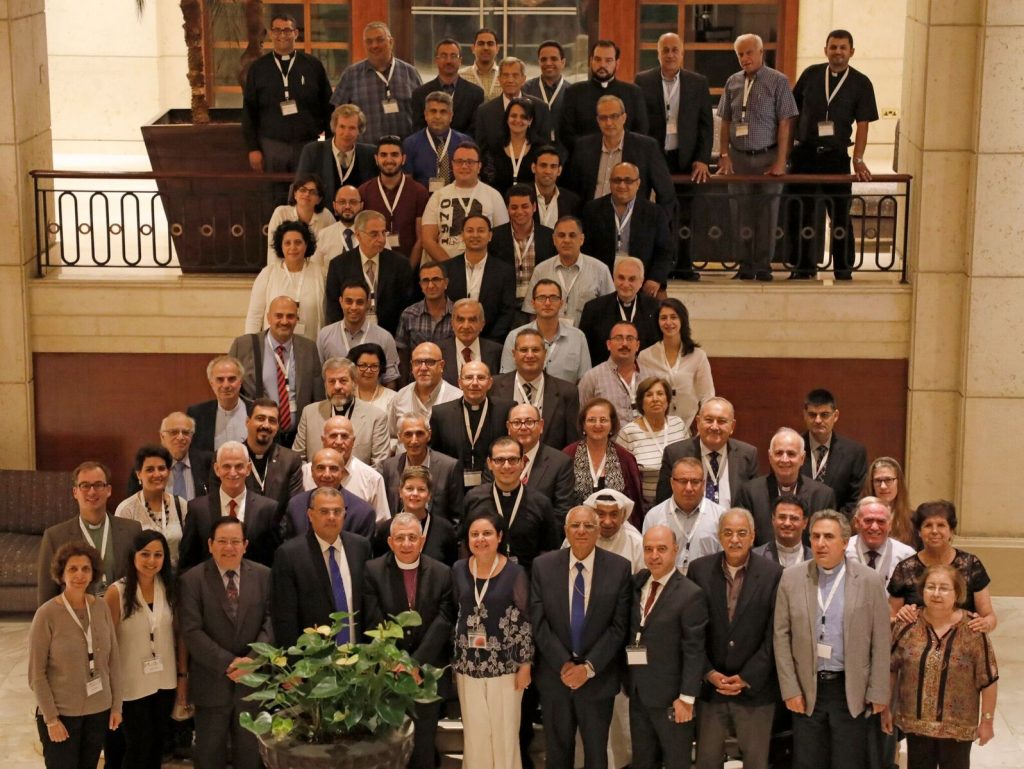 Amman, Jordan – “When the West looks at Christianity of the East, they don’t look at the mosaic, they look at the Orthodox, not the Evangelicals,” said, The Rev. Dr. Habib Badr of Lebanon.  This describes the environment which Middle Eastern Evangelicals are living, in the shadows of and looking toward the future of the Reformation.

As Lutheran and Reformed traditions around the world commemorate the 500th Year of Reformation, remembering the theology developed by the German reformer Martin Luther, Evangelical Christians in the Middle East assembled September 26-28 to do the same. The conference, “Evangelical Reformation and the Middle East: The Way Forward,” evaluated how the 1517 reformation event is amplified in all aspects of social, political and religious life in the Middle East today.

Invited by The Evangelical Lutheran Church in Jordan and the Holy Land (ELCJHL), Evangelical pastors, Heads of churches, elders, deacons, church council, principals, university faculty, and laity from Palestine, Jordan, Iraq, Armenia, Egypt, Lebanon, Syria, and Kuwait met in Jordan to evaluate the impact of the Reformation on the East and the future of continuity in reformation for mainline Evangelical Christians.

A concelebration worship service at The Evangelical Lutheran Church of the Good Shepherd, Amman opened the conference. (See story)

Along with the ELCJHL, 20 seminarians, leaders from the Fellowship of Middle East Evangelical Churches (FMECC), seminaries and universities from around the Middle East contributed lectures and papers commemorating the spread of the Reformation from the 16th century into the Middle East and its developments in the 21st century.

Meeting in the region where the three major monotheistic faiths –  Christianity, Islam, and Judaism – were founded, the group expressed what the Reformation adds to this rich identity.

In the Middle East, Evangelicals comprise the church family of mainline Evangelical Protestant denominations alongside the Catholic, Orthodox and Oriental Orthodox Christian families. The group stressed that the first preference in identity for Middle East Christians is to be called Evangelicals rather than Protestants, indicating that Protestants connotates – protests – a word that is understood as division and strife in a region that is all too familiar with divisions. They prefer the description Evangelicals because it represents the Gospel teachings of unity and love.

The Evangelical Reformation and the Middle East Conference stimulated discussions about the introduction of Reformation principles into Arab culture through missionaries, the fruits, and challenges from the European exposure, how the Middle Eastern churches retain their distinct identity today, and how the group expects to see reform continue in the future.

Plenary sessions offered panel presentations with questions and answers about the Evangelical’s role among fellow indigenous forms of Eastern Christianity, political engagement, gender justice, contextual theology and the ecumenical movement in sight of the Reformation.

[perfectpullquote align=”left” quotation=” cite=”The contribution that is expected in every aspect of life is to work toward unity of hearts equally with the unity of doctrine. – Bishop Munib Younan” link=”” color=”#ff0000″ font-style=”italic” font-family=”georgia” class=”” size=”21″][/perfectpullquote]

A few reformed principles stood out as key doctrines to the religious life of the Evangelical in the Middle East: Sola scriptura, justification by faith and the priesthood of all believers.

It was explained that the Reformation’s principle of priesthood for all believers transformed the spiritual life of women in the 16th century.  “The Reformation spread new principles of grace, the centrality of the Bible, the priesthood of all believers and new roles for women,” said Dr. Mary Mikhael, President Emeritus of the Near East School of Theology, Lebanon. However, there were no improvements for the woman of the 16th century within her society, therefore, “the maturity of principles of the Reformation has opened the door for women’s rights today.”

The ecumenical movement in the Middle East was also strongly connected to the priesthood of all believers.

“Reformation led to reformed churches, and the main pillars of the Reformation in the world are a natural progression of Evangelism. The more we study the priesthood of all believers, the more we understand it is a position of service, not of control,” The Rev. Najla Kassab, Head of the World Communion of Reformed Churches of Lebanon, said.

“The pains are the same. The closer the Evangelical and Catholic churches become, whether in Jerusalem, Palestine or the Gailiee, the more credibility we have in living with other religions,” said Bishop Emeritus Maroun Lahham, Latin Patriarchate of Jerusalem.

“[Orthodox Christians] say, ‘They have thrown out icons, or they don’t admit personal confessions to a Priest.’ We are only seen by what we reject not by what we believe together… We are not a cult, we are one united Church,” said Dr. Wageeh Michael of the Evangelical Theology Seminary in Cairo.

The Rev. Dr. Andrea Zaki – The Evangelical Church in Egypt

The Rev. Dr. Habib Badr -The Evangelical Church of Beirut

Dr. George Sabra – The Near East School of Theology, Lebanon

Dr. Mary Mikhael, President Emeritus of the Near East School of Theology, Lebanon

BISHOP YOUNAN’S ADDRESS TO THE CONFERENCE