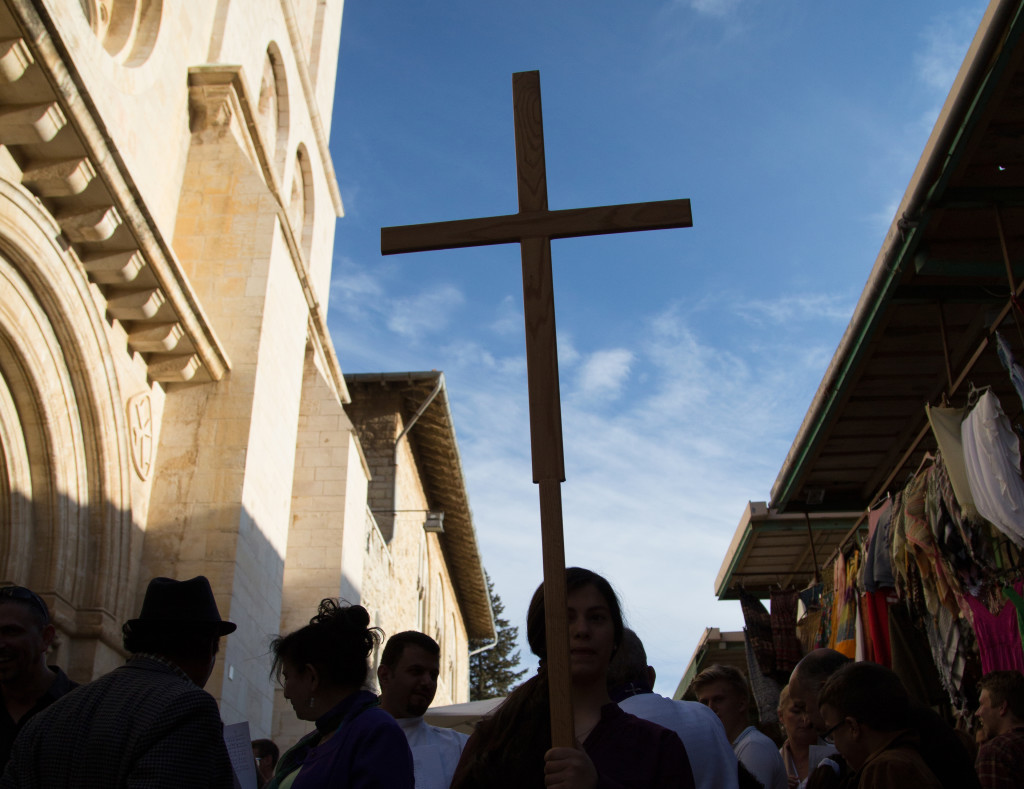 Alleluia, Christ is risen! Christ is risen indeed, Alleluia!
Easter Sunday, the Feast of the Resurrection of Our Lord, is really a feast of Jerusalem. All across the world today, Christians in western traditions are remembering our Lord’s crucifixion and resurrection, and when they do it they are thinking about Jerusalem. Whoever speaks of the resurrection naturally mentions Jerusalem, the city of resurrection.  Here in Jerusalem, after a long week of suffering and difficulty, after the cross, we rejoice with our sisters and brothers everywhere that Jesus is both crucified and risen. The resurrection of Jesus Christ is the hope of the whole world, but especially here in Jerusalem we cling to the news of the resurrection as our hope, our strength, and our courage to face the challenges and obstacles in the Middle East today.  This is the only thing that has kept us in this Holy Land.

We notice in the Gospel text that it was three women who, after the pain and tears of Good Friday, went early to the tomb on Sunday morning, when the male disciples had escaped. After all, it is often the women who are present in the most difficult times – at childbirth, caring for the sick, nurturing the elderly and the dying. On this morning, it was women once again who came with both gentleness and strength to anoint the body of Jesus in the tomb. Although the sun was risen, the darkness of night and grief still covered them. As they approached the tomb, they faced a serious problem: “Who will roll away the stone for us from the entrance to the tomb?”

If you visit the Church of the Holy Sepulchre (also known as the Church of the Resurrection), you can see very well what a concern this must have been for the women. In the Coptic and Syrian Orthodox areas you can see tombs which are similar to ones used in Jesus’ time. These tombs were meant for two or three persons, and the openings would have required a very large stone to close the entrance. This was exactly the worry of Mary Magdalene, Mary the mother of James, and Salome as they approached the tomb of Jesus: “The stone is too large, and we are just a few. The stone is stamped by a military order, and we have no authority. Who will roll away the stone for us?”

In this way, we can certainly identify with the women of that first Easter morning. Every day, we hear the terrible stories of Christians persecuted in Iraq, in Syria, in Libya. We see a wave of extremism which grows due to a power vacuum created by incorrect policies forced on the Middle East. We see people using the name of God to kill God’s people. We see shocking images which shake our bodies and silence us. Like the women who left the tomb and said nothing to anyone, we are at a loss for words. In the face of incredible obstacles and things we do not understand, we feel powerless and afraid. Who will roll away the stone for us?

Of course, there are many who do have something to say about the Middle East today. Conferences are organized, articles are written, and everyone from politicians and pundits to theologians and television personalities are asking “How big is the stone? What shape is the stone? Who put the stone there?” There is much talk of solidarity from the world, but we worry that it is only talk, and by ourselves we cannot do much for our Christian brothers and sisters and others who are suffering persecution. I’m sure the people in Iraq, Syria, Nigeria, and Pakistan are asking different questions: “Who will end this? Who will stop the extremists? Who will speak up when God’s image is humiliated and desecrated in the human being? Who will rescue us?”

At the same time, the stone of the Israeli-Palestinian conflict now seems bigger than ever. Some say the stone should just sit while other more important issues are discussed. Some argue that finding a solution is impossible, that the stone will never be moved, that equal rights and a just peace are just a dream.
Who will roll away the stone? Many believe military power and might is the answer. But when did military action ever bring an end to conflict? When did guns ever bring real and lasting peace with justice? When did tanks and bombs bring life? The women on that first Easter morning did not bring any media with them to the tomb. They did not bring an expert or a strong man or an army to roll way the stone. They came to anoint the one they loved! But when they arrived, they were shocked and surprised, for the stone, which was very large, had already been rolled back.

The stone, which was very large, had already been rolled back! This is the message which gives us hope today. We who are grieved for the present realities of the Middle East are like the women on that Easter morning, walking in the darkness of our grief, weighed down by fear. We come expecting to see the stone. We know well the reality of death, extremism, violence, and the denial of the rights of others in this world. There is no ignoring the occupation or the wall or the unjust policies which stand in our way. Who will roll away the stone for us?

The Good News is that the living God has already rolled back the stone blocking our hearts and lives. The stone of the tomb, seen today as the forces of extremism, terror, and injustice, has already been moved aside by the power of the resurrection. These forces hold no power over us! The power of the risen Christ has cleared every obstacle lying between us and abundant life. The power of the risen Christ has rolled away every stone standing between us and the risen Lord. For this reason, we give no power to those who would kill the body, for we know they cannot kill the spirit of the people of the resurrection.
I join my voice with Patriarch Emeritus of the Roman Catholic Church in Jerusalem, Michel Sabbah, who said, “Today is a time of martyria, a time of witness.” Martyria does not mean we offer ourselves up as lambs to the slaughter, but it does mean we willingly offer the martyrdom of our hearts and wills, as Christ offered himself on behalf of humanity, once and for all. As Archbishop Oscar Romero once said, “Not all’ says the Second Vatican Council, ‘will have the honor to give their blood physically, to be killed for the faith.’ However, God asks, of all those who believe in Him, a spirit of martyrdom, that is, we must die for our faith, even if the Lord does not grant us this honor.”

Therefore, this present very difficult situation in the Middle East must not be for us a time of groaning and despairing. Instead, in the midst of oppression, terror, and the boiling in the Middle East, we are to stand and ask ourselves, “How does the risen Lord motivate us to be a living witness?” After a long and dark Good Friday here in the Middle East and across the world, I point my sisters and brothers to 2 Corinthians 4:8-10: “We are afflicted in every way, but not crushed; perplexed, but not driven to despair; persecuted, but not forsaken; struck down, but not destroyed; always carrying in the body the death of Jesus, so that the life of Jesus may also be made visible in our bodies.”

One such living witness is Pope Tawadros II of the Coptic Orthodox Church. After the killing of twenty-one Coptic Christians at the hands of terrorists in Libya, he proclaimed that now is not the time for revenge, saying, “We condemn these evil acts, but we forgive the perpetrators, as we have been forgiven.” He is a living witness to the power of resurrection over the power of death.

Some would say these are stories of weakness. Some would say that the ones who forgive, the ones who show mercy, the ones who are a witness to the Gospel of love, leave nothing in their hands. Some would say it is easy to be a fatalist and throw everything on God. But the Good News of the resurrection is that love, mercy, and forgiveness are hallmarks of strength, not weakness. By his resurrection, Christ overcame evil, oppression, injustice and death, giving life to all. For “God chose what is foolish in the world to shame the wise; God chose what is weak in the world to shame the strong” (1 Corinthians 1:27) and “the wisdom of this world is foolishness with God.” (1 Corinthians 3:19)

Who will roll away the stone? The Middle East today does not need guns, or tanks, or extreme military might to counteract extreme political and pseudo-religious agendas. What the Middle East needs today is the power of love, mercy, and forgiveness. We need the kind of forgiveness displayed by a church which lost twenty-one of its baptized members. We need the kind of witness shown by the many fathers and mothers of the faith, on whose sacrifice the church has grown. We need the kind of love shown on the cross and at the empty tomb—a self-emptying, sacrificial love for the sake of the whole world. This is the love and hope we celebrate on Easter morning! And this sacrificial love, this living witness, is what will raise up the Middle East to a new day of peace, justice, freedom, and equal rights for all.

The risen Lord is at work here in the Middle East and in the Christian community across the world. He has called us to be living witnesses to the power of resurrection! Therefore, I greet you with this two thousand year old greeting of Jerusalem: