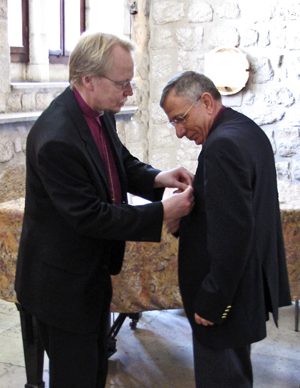 JERUSALEM, April 6, 2011 – “Bishop Younan has been encouraging people to make peace in this world…” These were just a few of the words Archbishop Kari Mäkinen of the Evangelical Lutheran Church in Finland spoke as the St. Henrik Cross was awarded to Bishop Munib Younan in a ceremony yesterday afternoon in Jerusalem.

Younan is only the 11th person to receive the St. Henrik Cross from the Evangelical Lutheran Church in Finland.

The awarding came amidst a visit to the Holy Land from a Finnish delegation. Also present for the awarding of the St. Henrik Cross were Bishops Kaarlo Kalliala and Wille Riekkinen. Younan was also presented with new Bishop’s robes and mitre.

In his presentation of the award Mäkinen spoke of many reasons Younan had been chosen to receive the St. Henrik Cross, touching on Younan’s work as a theologian and translator, but focusing on Younan’s tireless work for peace and justice as well as his commitment to ecumenical and interfaith dialogue.

Younan has had many ties to the Evangelical Lutheran Church in Finland throughout the years. Younan first studied in Finland from 1969-1972 studying Deaconry at Luther Opisto College in Järvenpää. In 1972 Younan moved to Helsinki to continue his studies at the University of Helsinki, from which he graduated in 1976 with a Master in Theology. Since his studies Younan has returned to Finald many times, most recently when he attended the consecration of Archbishop Kari Mäkinen on June 6th of last year.

Younan has served as Bishop of the Evangelical Lutheran Church in Jordan and the Holy Land since his election in 1998. In July of 2010 Younan was also elected to serve as President of the Lutheran World Federation, a communion of 145 Christian churches in the Lutheran tradition, representing over 70 million Christians. Younan is author of the book Witnessing for Peace: In Jerusalem and the World (Augsburg Fortress, 2003) and translator of The Augsburg Confession in Arabic (Emerezian Est., 1993).