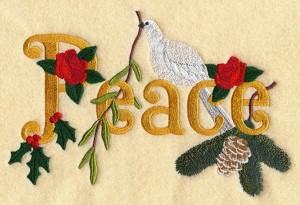 As I sit down to write my Christmas message during this Advent season, there are no words that touch me more deeply than these words from Isaiah chapter 40, “Comfort, O Comfort my people, says your God.” During this time I have been moved by the emotions associated with the beginning of life and the end of life, of birth and death. And I am very much aware that life begins and ends with a need for comfort. And in between, there is enough pain and suffering to go around, for people to cry out, “We are all like grass that withers, and flowers that fade.”

We have once again experienced warfare and death with the eight-day war in southern Israel and Gaza. Though a ceasefire has now been announced, we still feel the burden of a war in which there are no winners, in which people on both sides suffer from physical and emotional wounds and are in need of comforting, a war in which the survivors themselves feel the pain of loss and need to be comforted. Even though we are at a distance in Jerusalem, we have all been shaken by the images of families running to bomb shelters afraid, images of the dead and wounded, images of the rubble. We are moved so much by such tragedy, that it would seem that the words of the Book of Lamentations prevail where there is “no one to comfort her” (Lamentations 1:9, 17, 21).