JERUSALEM, 11 October 2011 – Following the recent events in Egypt, Bishop Munib Younan released the following statement today of prayer and concern for the people of Egypt. Please continue to hold the people of Egypt in your thoughts and prayers.

Statement of Prayer and Concern for the People of Egypt

It is with great concern that we have been following reports coming from Egypt over the past few days. We are distressed over the violence that has taken place and saddened over the loss of human life.

Over the last nine months, the world has watched closely the unfolding events in Egypt and has been encouraged by the cooperation of Muslims and Christians throughout the peaceful revolution. From the very beginning Christians and Muslims lifted their voices as one in calling for a modern civil society in Egypt. Together they called for a future based on fundamental human rights for every person and democratic ideas for their country—freedom of expression, freedom of religion, rights of minorities and gender equality. We are confident that this kind of cooperation can be restored.

Egyptian society has included Christians and Muslims living side by side for centuries, and we are confident that the Egyptian people can and will continue this life together. The Coptic Church and other Christian communities in Egypt are unique and integral parts of Egyptian society who lend strength to their country in their diversity.

In light of recent events, we are concerned that the fair implementation of freedom of religion for all Egyptians is not yet a reality—freedom to build houses of worship and to worship in security, regardless of religion, denomination, or sect. We call upon all in leadership roles to ensure this freedom for all Egyptians alike and to protect its citizens against those few extremists—whatever their religion—who are self-centered in their aims and violent in their actions.

We mourn with the families and friends of those citizens of Egypt who were killed this week. We hope that no further casualties will occur. We pray for the people of Egypt and especially our sisters and brothers in the Christian community. We urge the intermediary government and the military to cease all violence against civilians, to hold those accountable to justice, and to lead the country with integrity so that a new government can be democratically elected.

We hope that the developments of the Arab Awakening will support the popular will that has consistently called for the recognition of the fundamental human rights of all Egyptians, including freedom of religion and freedom of worship, regardless of religion, denomination or sect.

JERUSALEM, 5 October 2011 – Bishop Munib Younan was pleased to be present in Trondheim, Norway this past weekend for the installation of Bishop Helga Haugland Byfuglien as Presiding Bishop of the Church of Norway Bishops’ Conference.

In his words of greeting to Haugland Byfuglien, Younan spoke of the newly-installed Bishop’s passionate commitment to justice: “When you speak of justice we are touched, because your engagement is driven by love, even on difficult issues.”

Younan, bishop of the ELCJHL, has known Haugland Byfuglien since she became Bishop of Borg diocese in 2005. The Borg diocese is a partner diocese of the ELCJHL, and in his words of greeting Younan recalled “I quickly came to appreciate you as a sister that one can trust and confide in. So no wonder, then, that your fellow bishops would unanimously elect you to be their candidate for Presiding Bishop.”

Younan, who also serves as president of the Lutheran World Federation, also noted with great appreciation Haugland Byfuglien’s service as Nordic vice president for the LWF and their opportunities to further their relations there.

Haugland Byfuglien’s installation took place only two and a half months after the shocking attack on Norway, and Younan expressed the solidarity of the Lutheran world communion with the people of Norway and the religious communities of Norway. “We have prayed, and we shall still pray, for the victims of this horrendous attack.”

Younan continued, “We are your allies in combating – with peaceful means – any kind of incitement or hatred that some circles are trying to promote. We are your allies for a culture of mutual understanding and we oppose all culture of anti-Semitism, islamophobia, christianophobia and xenophobia that exist in our world. We look forward to continued cooperation with the Church of Norway on these values because the Church of Norway has carried these values to the world.”

Younan also expressed his admiration to how the Church of Norway ministered to all, saying “we in the outside world admired the way in which the church became a church of the suffering and gave pastoral care both to those who belong to the church and those who do not.”

Younan also expressed admiration for the way in which the King, the Prime Minister, and the Government of Norway cared for the situation.

JERUSALEM, October 7, 2010 – Check out what’s been happening in the ELCJHL and keep us in your thoughts and prayers. Follow the links below to view or download the October-November 2010 Newsletter and the October and November Calendars. 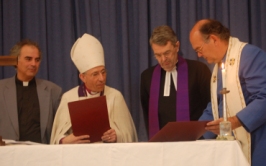 Churches cooperate in order to strengthen evangelical Christian witness, not their institutions. Our interdependence as churches is a source of strength. This was part of the message of ELCJHL Bishop Munib Younan gave at the March 24, 2010, partnership service. There, Younan and the Rt. Rev. William Hewitt, moderator of the Church of Scotland, signed an agreement formalizing the relationship between the ELCJHL and the Church of Scotland. St. Andrew’s Church in West Jerusalem hosted the afternoon event. 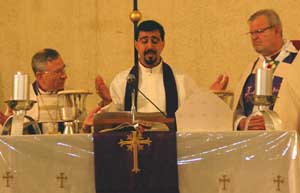 Rev. Saliba Rishmawi was installed as pastor of the ELCJHL Lutheran Church of Hope in Ramallah, West Bank, on Sunday, March 14, 2010. Many clergy, ELCJHL members and friends, as well as local dignitaries, attended the festive event. Pictured here is Rev. Rishmawi (center) with ELCJHL Bishop Munib Younan on his left and Bishop Martin Lind of the Diocese of Linköping, Church of Sweden, on his right, during the installation service. 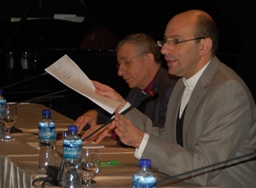 Rev. Dr. Mitri Raheb (shown right), ELCJHL pastor of Christmas Lutheran Church in Bethlehem, Palestine, is in the United States this week speaking at a host of venues about conditions in the occupied Palestinian Territories. Raheb was scheduled to speak at several Minnesota churches, as well as at the Nobel Peace Prize Forum at Augsburg College, an ELCA college in Minneapolis, Minnesota.

You can access the audio and video of the chapel service at which he preached at the ELCA Luther Seminary on March 4 by clicking here. 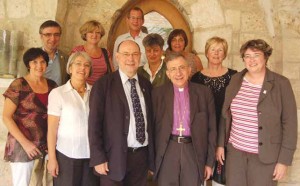 A delegation from the Evangelical Church in the Rhineland met with Bishop Munib Younan on Oct. 17, 2009 to discuss conditions in the Holy Land and renew their friendship with the ELCJHL.

You can read the delegation’s response to the trip here.

Following an invitation from Peace Not Walls staff, on January 5 Lutheran filmmaker Tim Frakes donated his time and expertise for two website and video production workshops for high school students at schools of the Evangelical Lutheran Church in Jordan and the Holy Land (ELCJHL). Ten students, a teacher, a volunteer, and a principal attended at no cost during their winter school break and in spite of the fighting in the nearby Gaza Strip.

Participants were instructed in basic camera technique, composition, and sound recording, and were also introduced to new video social networking sites, blogging, and Facebook. Students showed interest, and through Facebook some now have continued their conversation with Frakes.  Frakes told the students, “I don’t want to teach you how to make videos; I want you to change the world through your videos.”

The workshops were held at the Dar Al Kalima Lutheran School in Bethlehem and at the Evangelical Lutheran School of Beit Sahour and were organized by Sister Sylvia Countess, ELCA Global Mission assistant to ELCJHL schools director Dr. Charlie Haddad.

A student at the Dar al-Kalima Lutheran School in Bethlehem listens during the workshop.

(Reproduced with permission from elca.org) 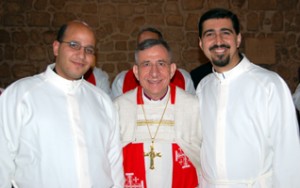 For two weeks in July they met, about 20 kids from Ramallah School of Hope, with facilitators from a peace group in the US, to learn and foster creativity, non-violence and peace-building skills.  “Love thy Neighbor” is a non-profit organization dedicated to providing educational resources and programs about the plight of Palestinians in Palestine/Israel to support both peoples’ deepening commitment to nonviolence as the way to bring a just peace for themselves and their neighbors.