RAMALLAH/JERUSALEM, 26 May 2012 – With spinning bodies, whirling traditional costumes, and powerful leaps the more than 45 high school students that make up Al-Raja Folkloric Dance Troupe of the Evangelical Lutheran School of Hope in Ramallah wowed the packed audience during their 12 May performance.

As living witnesses to the “hope” for which they are named—al-Raja means hope in the Arabic language—the students performed with a joy and enthusiasm that was irresistible to the crowd.

The evening’s performance also included traditional songs performed by students from the Evangelical Lutheran School of Hope in Ramallah.

JERUSALEM, May 20, 2011 – The al-Raja Folkloric Dance Troupe of the Evangelical Lutheran School of Hope in Ramallah soared to new heights with its performance last week.

The more than 45 high school students come together after class to practice Dabke, the traditional dance of the Palestinian people, many hours per week during the school year, and their love for the art shone through their passionate performance.

Their name—al-Raja—means “hope” in the Arabic language, and through their bold movements, traditional embroidered costumes, and lively Arab music they convey both the history of the Palestinian people and their hopes and dreams for freedom and peace in their land. In their dancing students Evangelical Lutheran School of Hope in Ramallah—Christian and Muslim alike—offer a powerful witness that the ELCJHL is proud to support. 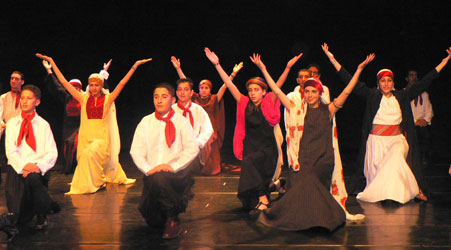 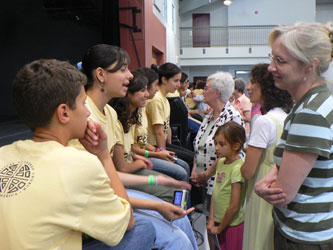