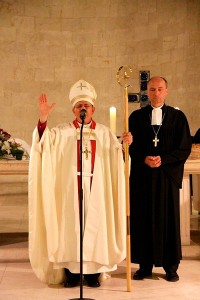 The Church of the Redeemer, Old City Jerusalem celebrated the Reformation with a full congregation (standing room only, literally) of people from around the world. The pipe organ was accompanied by a brass band and the singing of more than 400 people from around the world. As is tradition in this church, the Lord’s Prayer is recited in all persons’ native language, offering a unique blend of English, German, Spanish, Swedish, Norwegian, Finnish, Arabic, and many, many more spoken to the familiar cadence and melodies familiar to the Protestant church worldwide.

Reformation Day is a holiday celebrated by Lutherans (among other Protestant churches) in remembrance of the subsequent reformation of the Church of Rome by Martin Luther through his posting of the thesis on the door of his church on All Saints day, 31 October 1517. The 95 Theses were quickly translated from Latin into German, printed, and widely copied, making the controversy one of the first in history to be aided by the printing press. Within two weeks, copies of the theses had spread throughout Germany; within two months throughout Europe.

Listen to the opening hymn and view more photos.