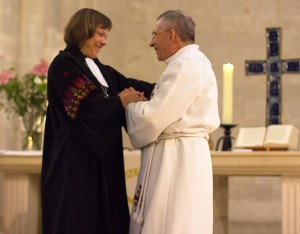 JERUSALEM – The President of the Evangelische Kirche von Westfalen, Annette Kurschus, visited the ELCJHL on invitation of Bishop Younan to help nourish and grow the relationship between the two churches. Annette Kurschus, joined by Rev. Gerhard Duncker and a delegation of leaders from her church in Westphalia, visited a number of the ELCJHL’s ministries, including the school in Beit Sahour and the Evangelical Lutheran Church of the Redeemer in Jerusalem.  The delegation also visited the ministries of the Evangelischen Kirche (EKD) in Jerusalem. 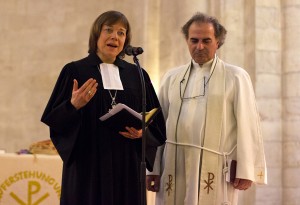 President Kurschus and her delegation joined Bishop Munib Younan at a service at the Evangelical Lutheran Church of the Redeemer in Jerusalem on Sunday, April 7th. The service was held in both German and Arabic with President Kurschus giving the sermon in German and Lutheran Church of the Redeemer pastor Rev. Ibrahim Azar translating for the congregation.

Bishop Younan welcomed the President and her delegation and said that he hoped that the relationship between the ELCJHL and the Evangelische Kirche von Westfalen would continue to grow. Bishop Younan presented gifts to both President Kurschus and to Rev. Gerhard Duncker, who Bishop Younan recognized for his service to the ELCJHL over the years in representing the Church in Westphalia.

To see photos from the event, visit the ELCJHL’s photo gallery.