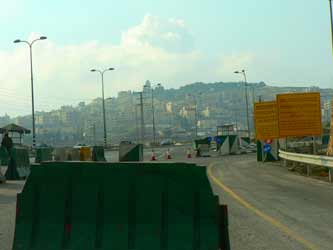 There have been “forbidden roads” for a long time now – within Palestinian land – that Palestinians are not allowed to drive on. They are by-pass roads for Israeli settlers only. Now a new military order prohibits Palestinians living in the West Bank from entering Israeli via any route other than one of the 11 designated crossings for Palestinians only, and then only on foot. Israelis are prohibited from transporting West Bank Palestinians through these passages into Israel.

According to Israeli reporter Amira Hass in Haaretz, the signs say:

“Passage is for Israelis only. Transporting and/or movement of people who are not Israelis is forbidden through this passage. The yellow signs explain who is an Israeli. The definiation is in the major general’s order, and is the standard definition used in military orders declaring ‘a closed military area’ to Palestinians, where only Israelis are allowed to enter. ‘An Israeli,’ says the order and the sign, ‘is a resident of Israel, someone whose residency is in the region (meaning the occupied territory, Amira adds) and is an Israeli citizen (a settler, she says), or one who is eligible to become an immigrant according to the Law of Return – 1950 and someone who is not a resident of the region but has a valid entry permit to Israel (a tourist).”