Some are calling it the second political earthquake to hit the Holy Land in a year. In early results, it looks as if more than 70% of Palestinians have chosen Hamas in the first general election in 10 years. Prime Minister Qurei and the cabinet have resigned to make way for the new government. It was a festive mood Wednesday as throngs surrounded the Post Office on Salahadin street, one of the six post offices used for the East Jerusalemites to vote. “It’s a party! It’s the first time we’ve gotten to vote in 10 years!” said one older man. The overriding theme was a vote for change. It looks like they got their wish, but only time will tell exactly what that change will look like. 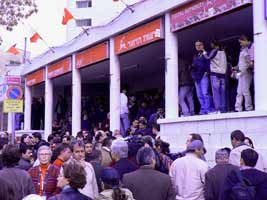