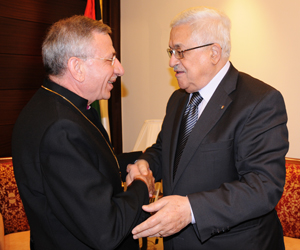 Palestinian Authority (PA) President Mahmoud Abbas expressed to Bishop Dr. Munib A. Younan his sincere joy and satisfaction upon receiving the news of the Bishop’s election as the Lutheran World Federation (LWF) President at the recent LWF assembly held in Stuttgart, Germany, in late July. PA President Abbas also emphasized repeatedly his solid support of the Bishop in his new role as the LWF President.

The PA President and Bishop Younan met on Thursday, August 19, 2010, at the Office of the President in the West Bank city of Ramallah.

Representatives in the delegation were The Right Rev. Dr. Munib A. Younan, Bishop of the Evangelical Lutheran Church in Jordan and the Holy Land (ELCJHL) and LWF President; The Rev. Ibrahim Azar, Pastor of the Church of the Redeemer Arabic Congregation and President of the ELCJHL Synod; Dr. Tawfiq Nasser, Chief Executive Officer of Augusta Victoria Hospital; and The Rev. Mark Brown, Regional Representative, LWF Jerusalem.

Discussions focused on the constituency of the LWF, highlighting growing Lutheran communities in Asia and Africa; the significance of the recent LWF elections; and the importance of an Arab-Palestinian Christian holding the position of President of the LWF.

The President emphasized the major role Bishop Younan will play as the LWF President in offering encouragement and direction in the upcoming peace talks, and reiterated the importance of the church as a promoter of moderation in the region. Mr. Ziad Bandak, Advisor to the President on Christian Affairs, highlighted the positive political and economic role the Lutheran Church plays in all the areas where it serves.

Bishop Younan informed the President of the official position of the LWF on the Palestinian-Israeli conflict. The LWF calls for a two state solution based on the 1967 borders where the Palestinians and Israelis are living side by side in peace, justice and reconciliation, a halt to settlement activities, the sharing of Jerusalem as a capital for two states, a political solution for the refugees, and a sharing of natural resources. The PA President was highly supportive in its position on final status issues of the conflict.

The PA President, Bishop Younan, and the delegation also discussed the programs of the LWF and the ELCJHL in Jerusalem, including the vital role of the Augusta Victoria Hospital, the importance of the Mount of Olives Housing Project, and plans of the ELCJHL to develop within Jerusalem’s Old City a school of nursing with a specialization in gerontology.

President Abbas ended the meeting by affirming the role of Bishop Younan as an exemplary ambassador for peace, justice and moderation, and expressed full confidence in the Bishop to represent the whole of the Palestinian people, Muslims and Christians alike, in his person as he travels through the LWF fields of operation and elsewhere in the world.