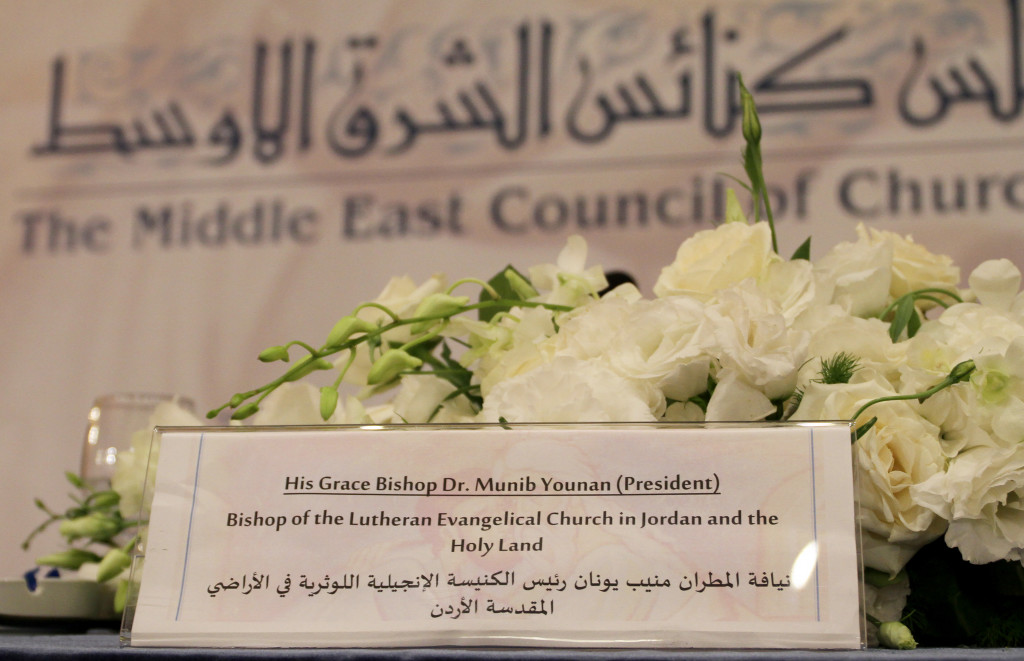 Amman, 6 September 2016 – Leaders and delegates from the member churches that constitute the four families of the Middle East Council of Churches (MECC) gathered in Amman, Jordan for its 11th General Assembly. The four families of Christian churches: Oriental Orthodox Family, Orthodox Family, Evangelical Family and the Catholic Family gathered this week with a theme from Psalm 136:1 “Give thanks to the Lord for He is good, His mercy endures forever.”

The General Assembly was hosted by Patriarch Theophilos III of Jerusalem. The Assembly met for the first time in Jordan with a cordial welcome from His Majesty King Abdullah II ibn Al-Hussein of Jordan.

Evangelical Lutheran Church in Jordan and the Holy Land His Grace Bishop Munib A. Younan’s term as the Evangelical Family president ended. MECC offered, as a token of appreciation, to recognize Bishop Younan and the other previous presidents of church families as Honorary Presidents.

The Council reaffirmed its mission of Christian unity to gather churches of the Middle East and to be a communication tool between each other so that they remain in permanent relationship and face the difficulties together.

“Today it is Our Lord Jesus who gathers us as one holy universal apostolic church, and He is in our midst. He is the one who unites us and confirms our mission to carry together, each in their own way, the Gospel of love in the Middle East,” Bishop Younan spoke to the assembly.

After years of internal and external challenges, the MECC vowed to renew the organization and stand steadfast in its mission to Middle Eastern Christians through the love of Christ and the mercy of the Lord.

The Assembly of Heads of churches, Patriarchs, Metropolitans, Archbishops, Bishops, and Reverends announced that it will restore confidence in its message of hope, service and social justice.

“Reinvigorating the MECC is both a Christian and a national duty… We must proclaim words of comfort, words o equality, words of inclusion, words honoring diversity and pluralism, words of justice, words of freedom of religion,” Bishop Younan said.

Call to Action from Western Churches

“We are not asking the world for protection, but for peace!” Patriarch of Antioch and All the East for the Greek Orthodox Patriarchate of Antioch, Youhanna X, said.

General Secretary Father Michel Jalakh called on members to compose a document from member churches that address MECC thinking, the common denominator among them and their view about the external forces, thus helping the West to better understand the reality of churches in the East.

Due to immigration and movement, then president of the Oriental Orthodox Family , His Holiness Catholicos Aram I, asked members to remember Middle Eastern churches in diaspora.

“We must be in cooperation with our diaspora church. We have become global churches. But know that our roots are here, our community is global, and we have a common responsibility to help the diaspora of the Middle East.”

Remember Rootedness in the Region

Acknowledging the challenges of the region, The MECC Keynote address by Catholicos Aram I urged the council to recall its deep rootedness,

“Stay in the Middle East, and stay rooted. “Christianity is the root of this region, not the branch,” Catholicos Aram I said.

Members discussed ways in which Christian-Muslim relations are vital to the region and developing methods to maintain relations between the two, encouraging the Council that relations today can mirror the cooperation of the two religions from decades past in which Muslim and Christians lived with respect of each other.

“Pope Francis has called this the year of mercy, and so the church is finding acceptance in the Muslim community because the church is entering with mercy.” Father Bader.

His Grace Bishop Younan said, “…the Church in the Middle East must work with people of good conscience from every religion as our companions in this one motherland, to implant these noble and sublime common values.”

Responsibility for Diakonia and Social Justice

In the spirit of MECC’s pledge to promote social reconciliation and ease human suffering through diakonia and social justice, the Assembly outlined its service projects to date: Aiding displaced families in Syria, Lebanon, and Jordan through its member churches.

The Assembly also collectively agreed to respect the historical status quo of worship spaces including the Church of the Holy Sepulchre for Christians and the Al-Aqsa Mosque for Muslims.

In Other MECC Business

New presidents for the church families were also elected at the General Assembly:

LWF President Bishop Munib A. Younan’s Speech to the Assembly:


Final Statement of the 11th General Assembly in Arabic:


Final Statement of the 11th General Assembly in English: