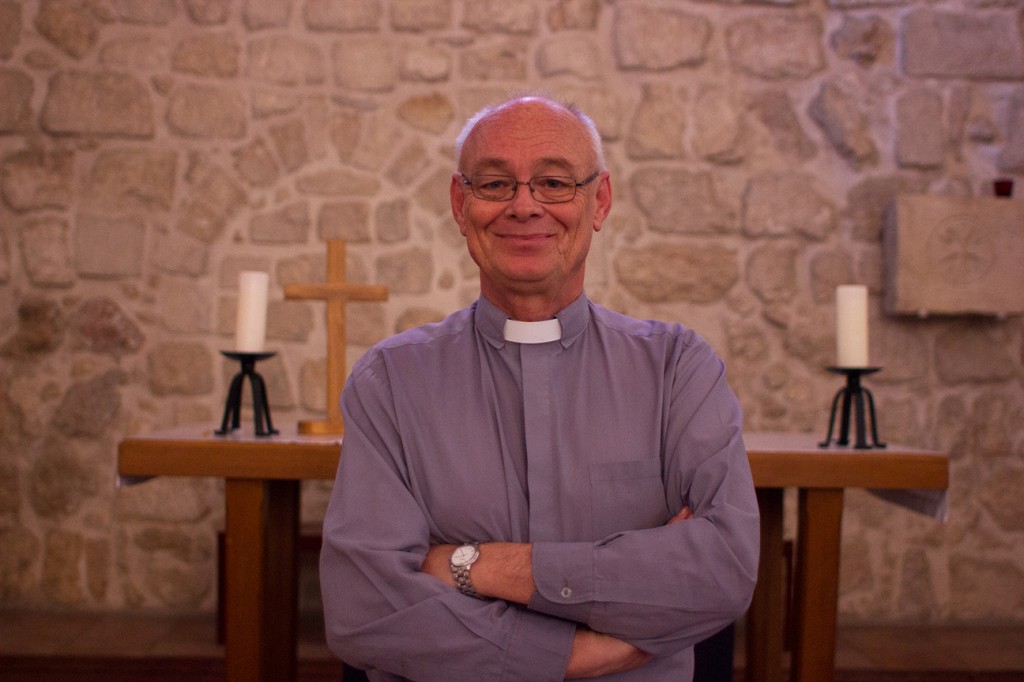 We sat down with Rev. Pearson to talk to him about himself and the Baptismal Site at Bethany-Beyond-the-Jordan.

Tell us a little bit about yourself.

I was born in Sweden and always grew up in a Christian environment.  First in the Salvation Army, but then I was involved in the youth movement in our home congregation in the Church of Sweden.  I started out studying journalism, but after a year, I changed my mind and went into theology.  I met my wife, who is a bio-chemist, when I was studying theology.  We married and I became the pastor of a small congregation in Sweden.  Then, we went to Zimbabwe in 1982, just after the War of Independence.  Kerstin set up a laboratory at a hospital that had been closed during the war and I became the pastor of a congregation.  I spent two years there before being asked by the Evangelical Lutheran Church in Zimbabwe (ELCZ) to start an educational center in the south of Zimbabwe.  I wrote a textbook and grammar in Shona, the local language, and we also taught the language to missionaries and NGOs working in Zimbabwe.  We went back to Sweden in the ‘90s and I took over the missionary education for the Church of Sweden.  But we didn’t stay long – we went to the Gulf, the Arabian Peninsula, for 10 years, working with the Middle East Council of Churches (MECC).  We worked as the Gulf Liaison Officers of the MECC with the goal of helping churches coordinate their services to the often abused and oppressed migrant population.  After finishing our commitment in the Gulf and moving back to Sweden, we thought our traveling days were over.  After two years, we found the Ecumenical Secretary position in Jerusalem where I have been serving.  And now we’re heading out again!

What drew you to the position in Jordan?

Since I came here in 2010, I’ve been involved in bits and pieces with the Baptismal Site.  I’ve been working on informing people about what’s going on there.  I was in a meeting with Bishop Munib Younan and we were discussing the Baptismal Site and how they could not find a person to make the commitment to be the pastor there.  The Bishop said, “Rolf, why don’t you go be the pastor at the Baptismal Site?”  After thinking about it, I told the Bishop that I would like to do it.  Kerstin and I have always been up for a challenge.  We’ve lived a wartorn and poor Zimbabwe and in the affluent Dubai and we’ve lived in a struggling Jerusalem and I am very interested to see what life in the desert will be like.

It feels like a privilege to get an opportunity to live in a place like this after all these years.  I’m looking forward to the silence and the quiet of the place.

Can you tell us about a little bit about the dedication.

There will be almost 150 international guests, including Archbishops and it’s possible that King Abdullah II of Jordan will be there.  The Amman congregation will be joining the dedication to show their support.  It is always exciting to see a new church being inaugurated, especially in this part of the world.

How are you hoping people view or use this site?

Jordan is also the Holy Land.  Some people only do Israel and Palestine, but there’s also Mt. Nebo, Madaba, and other holy places in Jordan.  It makes sense to see where Jesus was baptized, as well as where he was born and died.  I can see the site being a very central place for pilgrimage and transfer between Jordan, Israel, and Palestine.  I hope that the place, especially for the local Amman congregation of the Evangelical Lutheran Church in Jordan and the Holy Land, can be a spiritual and restful place to visit.

The possibilities are endless.

What do you hope that people will take away from the Baptismal Site?

We are going to develop worship, including worship surrounding both baptism and baptismal renewal.  We are hoping that pilgrims will find a place where they can be renewed spiritually, a place to understand the religious, social and political context of the place where they are, and to see the Church presence in the Middle East.

We are still looking for donations – of either money or in-kind gifts – to help us complete the building process.  For those desiring to support the Baptismal Site monetarily, please send checks made out to “ELCA” and “GMG0196 – ELCJHL Baptismal Site” noted in the memo line to:

All donations to the ELCA are tax-deductible in the United States and will applied directly to project costs.

For those outside of the United States, if you would like to donate to the completion of the Baptismal Site, you can send checks here:

If you prefer to make a bank transfer, please contact us at administration@elcjhl.org for updated information.