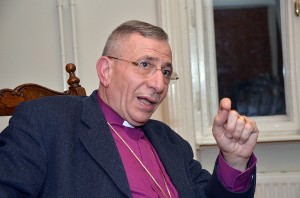 GENEVA, 12 April 2013 (LWI) – The first-ever global Arms Trade Treaty will be an important tool for peaceful and non-violent resolution of conflicts, with justice and respect for the dignity and rights of every person, says Bishop Dr Munib A. Younan, President of The Lutheran World Federation (LWF).

In a statement today welcoming the adoption of the Arms Trade Treaty by the United Nations General Assembly on 2 April, Younan emphasized, “Our world needs more justice and human rights, not more guns. The Arms Trade Treaty will help make that possible.”

Younan who is bishop of the Evangelical Lutheran Church in Jordan and the Holy Land, called upon the LWF member churches to urge their respective governments “to quickly sign and ratify” the treaty, which he said is “an important tool toward reducing armed violence in our world.”

Visit the LWF’s webpage page to read the rest of the article or to read Bishop Younan’s full statement on the Arms Trade Treaty.