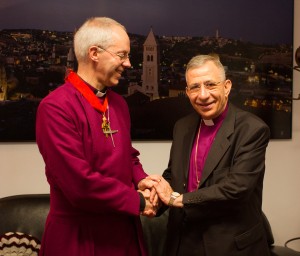 “I welcome Archbishop Welby to the Holy Land and look forward to working together to continue improving Lutheran and Anglican relationship regionally.”

Bishop Younan also serves as President of The Lutheran World Federation (LWF) which has been in dialogue with the Anglican Communion since 1972. In 2012, the Anglican-Lutheran International Commission (ALIC – III) published the report “To Love and Serve the Lord,” which explores diakonia as an essential part of Christian identity and discipleship and as an expression of the unity of the church.

During the meeting with the Archbishop of Canterbury, the LWF president discussed the joint work between the two Christian World Communions. Lutheran and Anglican relations continue to be strengthened by the formation of a new coordinating body, the Anglican-Lutheran International Coordinating Committee (ALICC). The committee’s first meeting will take place this September.

“As Lutherans we are committed to working together with our Anglican brothers and sisters for the unity of the church and to be a living witness of peace and reconciliation in the contexts in which we serve, be it in the Middle East or in other regions in our world today,” Younan concluded.

You can also read this article on the LWF website.