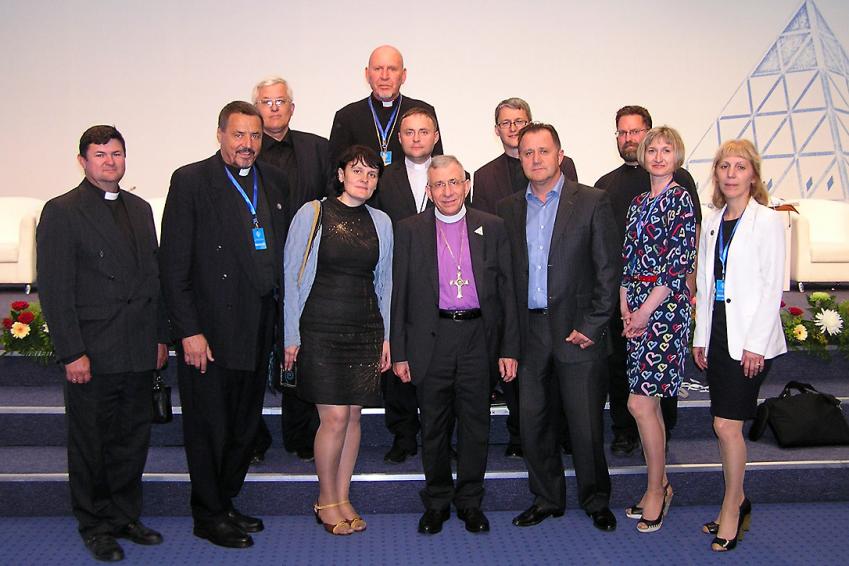 LWF President Bishop Dr Munib A. Younan with Bishop Yuri Novgorodov (very last row) and other pastors and church officials of the Evangelical Lutheran Church in the Republic of Kazakhstan, during the June visit to Astana. Photo: ELCRK

Accompanying each other in the Lutheran communion

JERUSALEM, 30 July 2015 – The President of The Lutheran World Federation (LWF) Bishop Dr Munib A. Younan recently paid a pastoral visit to the Evangelical Lutheran Church in the Republic of Kazakhstan (ELCRK), during which he met a group of 20 pastors and Bishop Yuri Novgorodov in Astana.

“This was my first visit to Kazakhstan as LWF president. I learned a lot about the joys and challenges of the Kazakhstan Lutheran church. I explained our work together with the member churches: caring for refugees, advocacy for climate justice, women’s empowerment, theological reflections, ecumenical relations and inter-religious dialogue and so on,” Younan said.

“Being in the communion means we are in pulpit and altar fellowship,” Younan said. “This means when I visit your Church I am at home with my sisters and brothers in Christ as we celebrate the Holy Communion that sends us together to the world with a call to holistic mission.”

The conversations helped clarify the LWF’s role in the relationship with its member churches. “It was important to emphasize that the LWF as a communion of churches respects the autonomy of each church and that we accompany the churches upon invitation.”

However, being churches in communion “also means that we are accountable to each other,” Younan remarked.

The ELCRK’s core membership is made up of 2500 people in 50 congregations scattered across the country. The distance between congregations can be up to 3000kms. The president saw his visit as an opportunity to learn firsthand the challenges of being geographically isolated.

“I certainly felt how being far and in such a big country, and in another language context, can be a hindrance. I came to understand the difficulty of even gathering pastors to a national church meeting,” said Younan, who is bishop of the Evangelical Lutheran Church in Jordan and the Holy Land.

Education and formation of pastors are key priorities of the ELCRK, which belongs to the Federation of the Evangelical Lutheran Churches in Russia and Other States. “There is a hunger for Lutheran literature to be translated into Russian,” he noted.

The LWF president also heard the church’s excitement over plans to build a new church in Astana that will include a community center, youth services and guest house, and about its good relations with the government.

But it was the church’s spirituality and deep piety that most struck the LWF president. “You have a certain spirituality in Kazakhstan; and I invite you to come to the table with your spirituality. It is an added value,” he said, referring to conversations with the pastors, and his church attendance.

“I suggested that they should be more involved in the life of the communion, including the Global Young Reformers’ Network, the women’s networks and other aspects of LWF,” he said. “This for me was a pastoral visit, and I let them know how important they are as part of the Lutheran communion.”

Younan was in Astana also to participate in the international Congress of Leaders of World and Traditional Religions. At the gathering, he challenged the religious and political leaders to enhance their own engagement in fighting extremism and in peace building efforts.

“Extremists exist in all religions. None has a monopoly on extremism. How do our speeches in the churches, mosques, temples reflect living together and co-existence? That is a challenge for us right now,” he noted.

Younan emphasized his call to faith groups to examine the curricula they teach and offer their countries by asking: “Do we promote extremism or acceptance of the other that is different? Do we promote the concept of seeing the image of God in the other?”

To read this in its original format, you can visit the Lutheran World Federation’s website.