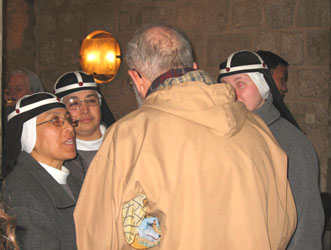 Redeemer Church hosted the third day of the Week for Prayer for Christian Unity Tuesday, Jan. 23, with a joint service in six languages urging Christians to unite in their struggles for peace, justice and reconciliation. During this week, church leaders and lay Christians alike gather at a different church each evening to join with one another in prayer and fellowship.As with the other evenings, the churches was filled with the many different clerical gowns, headgear, signs and symbols of the huge variety of the Christian community in Jerusalem, which is made up of 13 churches in four families, the Eastern Orthodox, the Oriental Orthodox, the Catholics and the Protestants.

In the first of this year’s services at St. George’s Anglican Church, Bishop Riah Abu-Assal told those gathered that:

“As long as we continue to be fragmented and not united, we cannot have any impact on anything. We need to come closer to each other, and stop distancing the one from the other. This is the object of this wonderful “Week”. It is a call to become One: ONE IN HIM and ONE FOR HIM.”

This year’s theme, “He even makes the deaf to hear and the mute to speak” from Mark 7:37 came out of the Umlazi Township in South Africa, the site of much suffering still from the legacy of apartheid, poverty and oppression. Each year the World Council of Churches and the Pontifical Council for Christian Unity select a theme that comes from a particular local context to then be shared throughout the world during this week. Most of the world celebrates this week of prayer for the Unity of the Church a week earlier, but Jerusalem delays it to not interfere with the Orthodox and Armenian Christmas celebrations, which are later than the western calendars.