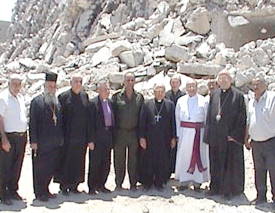 The Heads of Churches in Jerusalem visited both Gaza and Nablus in late July to see the people there under siege and constant closure that has been in force for months. With the tragedy in Lebanon and northern Israel, the ongoing tragedies in the Palestinian territories has been forgotten. The people there asked them to remember them. (Pictures courtesy of the Latin Patriarchate of Jerusalem)

We are approaching the sixth month with no salaries for government employees, and now more than 60% of Palestinian people fall under the poverty level of $2 a day. Almost 250 Palestinians have been killed in the last two and a half months. According to Israeli human rights organization BtSelem, 162 people were killed in July, the highest number since mid-2002, and approximately half of these casualties were civilians. The organization urges continued monitoring of events in the West Bank.

The IDF continues to act in the Occupied Territories, making arrests, destroying structures, and bombing residential neighborhoods from the air. The separation barrier continues to be built, and living conditions in the areas under occupation continue to be intolerable. It is precisely at such times that careful monitoring of Israel’s acts in the Occupied Territories is needed.