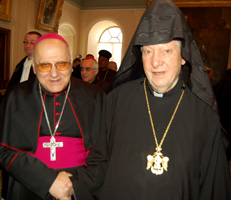 The Heads of local churches in Jerusalem and their delegations visited the Armenian Patriarchate to bring Christmas greetings Monday.  The Armenians celebrate Christmas on January 19th.  The churches visit one another on their Christmases, which are Jan 19th for Armenian, Jan 7 for Greek Orthodox and Dec 25 for Catholic, Evangelicals and others.

The 2008 “Week of Prayer for Christian Unity” celebrates the 100th anniversary of the inauguration of the “Church Unity Octave”. To commemorate this fact the initial draft of material for this year was prepared by the Graymoor Ecumenical and Interreligious Institute, New York, in consultation with representatives of other churches and ecumenical bodies in the USA. The Graymoor Institute is directed by the “Society of Atonement”, founded by Fr. Paul Watson who introduced the first Prayer Octave.

In the same spirit the biblical text chosen for this year: “Pray without ceasing” emphasizes that life in the Christian community is possible only through prayer. Further, it shows that prayer is an integral part of the life of Christians precisely as they seek to manifest the unity which is given them in Christ – a unity which is not limited to doctrinal agreements and formal statements, but finds expression in the things that make for peace, in concrete actions which express and build up their unity in Christ and with one another.