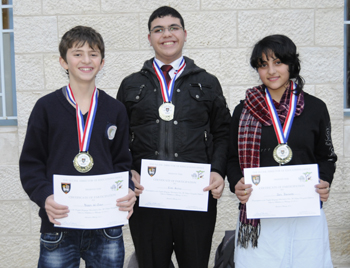 To the left, this year’s top-ranked English-language students smile as they prepare to return home after a fun day of games, cheers, and speeches, armed for next year’s bowl with new English-English-Arabic dictionaries. Click the photo to see a slideshow from the day, or click here. Photos © ELCJHL/Rev. Elizabeth McHan.

Together, all of the students had fun playing games, which required them to communicate in English to succeed, before the participants and cheer teams split off. The participants went to complete their registration and receive final instructions. The cheer teams left to prepare their English language cheers.

The English Language Bowl is an annual event organized by the office of the ELCJHL Director of Schools in close coordination and cooperation with the four ELCJHL schools.

The event, now in its fourth year, went through a name change and a significant restructuring in this year.

The coordinators of the event stated a wish to “emphasize for the students that it is rewarding and exciting to learn English together, and to build a spirit of community among all the participants, teachers, and volunteers.”

To help emphasize the communal and fun nature of the event, it was decided that ‘Bowl’ would replace ‘Competition’. “A ‘bowl’ in this case carries the meaning of fun and teamwork, with activities that are enjoyed by both the players and the fans who come to cheer for their school.”

The final rankings of the English Language Bowl were decided based on two speeches:

The second speech was a freestyle speech based on one of two topics. At the end of their first speech, each student picked two pieces of paper from a hat, which were sealed in an envelope until 10 minutes before they were expected back on stage. Once the envelope was opened, they each student was instructed to choose one of the topics and prepare a one-minute speech. Additional categories of marking were added for the second speech, including organization of ideas, content, and grammar.

At the end of the freestyle speech, the judges were allowed to ask one follow-up question, which would also be considered in the student’s final scoring.

This year’s judges included the Rev. Dr. Fred Strickert, Pastor of the English-speaking congregation at the Evangelical Lutheran Church of the Redeemer, and a retired college professor; the Rev. Shadra Suzanne Schoffner, Assistant to the Young Adult in Global Mission (YAGM) Coordinator and Presbyterian minister; Dr. Gilbert Schultz, sent by Canadian Lutheran World Relief to work with the Lutheran World Federation’s Augusta Victoria Hospital, and a Professor Emeritus from Univeristy of Calgary in Microbiology and Bio-Chemistry; and Anne Mayes, a career teacher from Great Britain, now connected to St. George’s College, Jerusalem.

Each of the 24 participants received a Certificate of Participation, and the top-ranked students from each grade received an English-English-Arabic dictionary.

In preparation for this annual event, English language teachers, coordinating with the ELCJCHL Director of Education Office help their students to prepare throughout the year, with amazing results.

Local English Language Bowls were held in each of the four ELCJHL Schools in December and January, with the top two English languages students from each of the 8th, 9th, and 10th grades moving on to the regional Bowl.