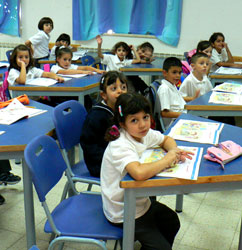 The school kids at the Lutheran schools in Palestine are lucky. While most of the 1.2 million Palestinian students are not in school because of a general strike, the Lutheran schools are leading the charge to ensure their students don’t pay the price of this latest situation. They have mostly remained open in the face of pressure to close and support the strike, and they are working with other private schools on an initiative to remain open.

In situations like this, the ones who lose in the end are the children. That is not acceptable,” said Dr. Charlie D. Haddad, Lutheran Schools’ Director.

According to Mr. Basre Salih, Director of International Relations for the PA Ministry of Education, only about 10% of the public schools opened their official school year on Saturday. Government workers are on strike because they have not been paid salary for over six months since the international boycott on aid began shortly after Hamas was elected in January. But the situation changes daily, and information is sketchy because those who track information for the government have also been on strike.

Dr. Haddad expressed his sympathy and support for the teachers who have not been paid, but also said the children should not suffer. The private schools felt pressure to support the strike this week, and on Tuesday, when the other private schools were pressured into closing, only the Lutheran schools opened.

Salih said that it is frustrating because this is “hurting the core of our education,” and because during the Al-Aqsa intifada, the Palestinians kept the schools open as much as they could. This is an example of how stretched and frustrated the people are, he said.

According to Dr. Haddad, ten percent of the 1.2 million Palestinian students attend private schools, like the ELCJHL, which are mostly open, and 12% go to UNRWA (United Nations Refugee Welfare Association) schools, which are also open.