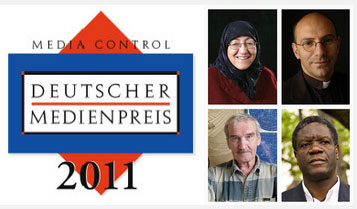 BETHLEHEM/JERUSALEM, 17 January 2012 – The ELCJHL is proud to announce that Rev. Dr. Mitri Raheb, Pastor of the Evangelical Lutheran Christmas Church in Bethlehem and President of the Synod is to be awarded to prestigious “Deutscher Medienpreis” (German Media Prize) at an official ceremony in the city of Baden-Baden in Germany on 24 February 2012.

In the official announcement from Deutcher Medienpreis, Pastor Raheb’s work in building up the outreach of the Evangelical Lutheran Christmas Church in Bethlehem in the areas of education, health care, and dialogue through the meeting places made available and welcoming.

The ministries of the Evangelical Lutheran Christmas Church and the Diyar Consortium, along with the other congregational and educational ministries of the ELCJHL reach out to thousands of individuals and families each year in Jerusalem, other parts of the West Bank, and in Amman, Jordan.

Bishop Younan congratulated Pastor Raheb on his prestigious prize, and expressed his pride in this international recognition for the work of Pastor Raheb and the ministries of the church.

Pastor Mitri expressed his delight in receiving this award and was humbled by the international appreciation and recognition of the efforts made on the local, regional, and international levels.

The ELCJHL is truly growing up generations of workers for peace, justice, and reconciliation, who see the image of God in all they meet and work for the rights and dignity of all.

Pastor Raheb will receive the award in February alongside the three other recipients, Stanislaw Petrow of Russia, Dr. Sakena Yacoobi of Afghanistan, and Dr. Denis Mukwege of the Congo.

For more information about the Deutscher Medienpreis, visit their website at: www.deutscher-medienpreis.de