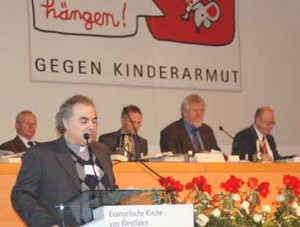 ELCJHL Pastor Ibrahim Azar brought greetings from the ELCJHL to the Evangelical Church of Westphalia, in Bielefeld, Germany, in his address at its annual general assembly on Nov. 12. A delegation of the EKvW was in Palestine in October as the two churches renew their long-term partnership. (Photo: Evangelische Kirche von Westfalen/Andrea Rose)