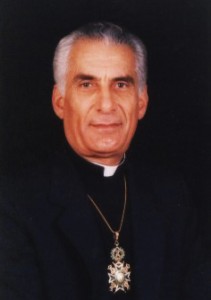 JERUSALEM – The Evangelical Lutheran Church in Jordan and the Holy Land sadly announces the death of Rev. Numan Smir, retired pastor of the ELCJHL.  Rev. Smir served the church in a number of capacities, at one point being president of the Synod. His pastoral career began at the Evangelical Lutheran Church of the Reformation in Beit Jala before he helped found the Good Shepherd Church in Amman, Jordan, a community that he served from 1976 until his retirement in 1992. Rev. Numan Smir died on Thursday, May 2, 2013 at the age of 81. The ELCJHL sends their condolences to Rev. Smir’s wife May and his children, Bassam, Husam, and Marwan. The funeral service will take place Sunday, May 5, 2013, in Amman, Jordan.  We ask for your prayers at this time.