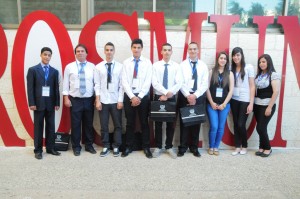 Students from the Model United Nations teams from Beit Sahour, Beit Jala, and Ramallah pose for a photo. (© ELCJHL)

The ELCJHL schools have been preparing a handful of students to participate in Model United Nations (MUN), in Jerusalem, Ramallah and, hopefully, around the world.

The Model United Nations, operating much like the formal version, gives student delegates the chance to develop their debating skills, as well as learning more about world politics and issues.  The ELCJHL is hoping that this will not just teach their students about global issues, but also be part of their peace education by learning about the other.

In 2014, the students are participating locally at the Rosary Sisters’ High School in Jerusalem and the Friends School in Ramallah.

We wish our students luck in their upcoming competitions!