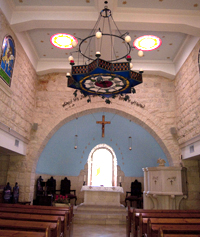 The congregations worship together each Sunday, with various other Bible study, social, and cultural events throughout the week. Special youth and women’s programs are run in several parishes.