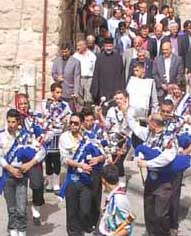 The ELCJHL celebrated a trio of anniversaries with dancing, exhibits, speeches and praise to God on May 16-17. Here the Talitha Kumi scout troupe leads a march from the Beit Sahour municipal building to the ELCJHL Beit Sahour church and school campus on May 16. Following are many of the church’s local and international friends.

Partners from around the world joined the ELCJHL in celebrating its anniversary at a celebratory worship service at the Lutheran Church of the Redeemer, Jerusalem, on May 17. After the service, attendees viewed a photo exhibition on the ELCJHL and enjoyed sweets.

This May the ELCJHL will celebrate its 50th anniversary. This year is also the 30th anniversary of its Arab bishopric and the 170th year of Lutheran witness in Palestine.

Festivities begin the morning of May 16 with music, dancing and lectures at the Lutheran School of Beit Sahour.

The following day at 3 p.m. there will be a special worship service with communion at the Lutheran Church of the Redeemer in Jerusalem, followed by a reception and the unveiling of a photo exhibit of the history of the ELCJHL.

The synod will welcome many guests and friends to the area for events, including its international partners in the Coordination Committee for Cooperation, better known as COCOP, for its annual meeting.