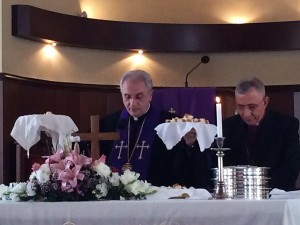 BEIRUT – On March 9th, 2014, in conjunction with the meeting of the Executive Committee of the Fellowship of Middle East Evangelical Churches (FMEEC), Bishop Munib Younan of the Evangelical Lutheran Church in the Holy Land and Rev. Dr. Habib Badr of the National Evangelical Church of Beirut concelebrated Holy Communion.

In 2006, the ELCJHL and six Reformed churches in the Middle East signed a mutual recognition agreement called the Amman Declaration.  Through this declaration, the churches recognize each other as apostolic churches in preaching the Gospel and administering the sacraments.  We mutually accept the validity of each church’s ministry and we continue to ask the Holy Spirit to bless this declaration and that it would lead us to the unity .

Bishop Younan preached in the service, emphasizing the modern temptation in the Middle East is to both read the Scriptures incorrectly and to allow extremism to spread.  In light of these temptations, we should, as churches, be united and in this unity we can be an integral part of our people and living witnesses to Arab society.