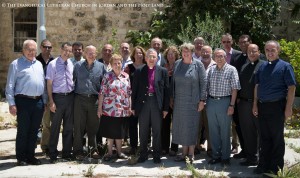 Participants of the Jewish-Christian Dialogue pose for a photo during a pause in sessions.