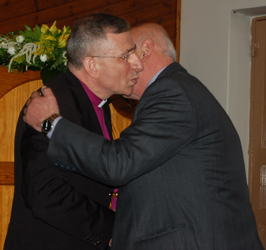 Hundreds from Beit Sahour community and the ELCJHL said thank you and goodbye to evangelist Hani Odeh, who was headmaster of the Beit Sahour Lutheran school and evangelist from 1984-2005.

Hani was born and raised in Beit Sahour, and attended the Beit Sahour school, which then only went up to 6th grade. He then taught at the school and went to Lebanon to study law, alternating months. After working in business with an electronics business, he was asked again to teach and then to become both headmaster of the school and preacher at the church in 1984.

During Hani’s tenure, the church was refurbished and the school grew up through senior high. He retired from the school in 2005, when they realized the Beit Sahour school needed a fulltime and separate headmaster. Vicar Imad Haddad, to be ordained Sunday, March 2, will succeed Hani and become the first full-time Pastor of the Beit Sahour Lutheran Church.