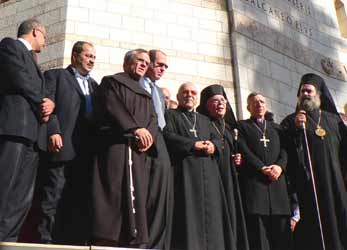 Thousands gathered Saturday in Nazareth to protest a failed bombing attempt by a Jewish family Friday night at the Church of the Annunciation in Nazareth, where Christians had gathered for traditional Lenten prayers. Fortunately, the homemade mixture of fireworks, flammable liquids and a jar of marbles and nails to serve as shrapnel didn’t explode properly, one witness said, and no one was seriously hurt. But when Muslims and Christians gathered quickly to protect the Holy Site, the army was called out to protect the Jewish family and disperse the crowd, using tear gas and force. Saturday’s protest was a mixture of anger and fear at what Muslims and Christians say is a growing intolerance for their religious sites and freedom.

Heads of churches and Muslim leaders gathered Sunday with Municipality officials, Knesset members and community leaders to calm fears and to call for religious tolerance and education against extremism. They led marchers through the streets to the courtyard of the Church, where the mayor, the Latin Patriarch and a local Muslim sheikh addressed the crowd.