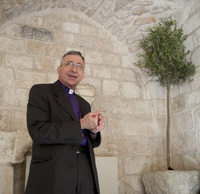 WITTENBERG, November 5, 2010 – It was the dove that came back with a freshly plucked olive leaf in its beak and the sign of hope that must have been to Noah and his family that Bishop Younan reflected on as he planted a tree in the Luther Garden in Wittenberg, Germany in early November.

“When Martin Luther was asked what he would do if he knew the world would end tomorrow, his response was that he would plant an apple tree. For Noah, the world had actually come to an end. The mythological world of the early chapters of Genesis was now a thing of the past, drown in the chaotic waters of the flood. Yet the presence of a living tree announced the promised future of a world transformed in God. Not just any tree, but the freshly plucked leaf of an olive tree.”

And as Younan planted a tree in the Luther Garden, a garden that will be filled with new and abundant life, seeded by the churches of the Lutheran communio in these years building up to the 500th anniversary of the Reformation, olive trees were planted at each of the congregations, schools, programs, and partners of the Evangelical Lutheran Church in Jordan and the Holy Land, the church in which Younan presides as Bishop.

In his reflection, Younan spoke of the hope for the future that the olive tree continues to embody for the people of the ELCJHL. “The olive tree can be surprising,” Younan said. “A single small shoot growing up from the bottom of an all but dead tree, can signify the beginning of a new era of abundant life, growing for centuries, and providing for generations of families not yet born.”

Younan spoke about how a single small shoot can enliven hope, and planted this new tree “as a visible symbol of the faith, love, and hope by which we pray that God may transform the world.”

Younan ended with verses 8 and 9 from Psalm 52:

But I am like a green olive tree in the house of God.
I trust in the steadfast love of God forever and ever.
I will thank you forever, because of what you have done.
In the presence of the faithful I will proclaim your name, for it is good.

Local church representatives, Mayor Eckhard Naumann of Wittenberg, and Minister-President of Saxony-Anhalt Prof. Dr. Wolfgang Bohmer were among those present for the tree planting.