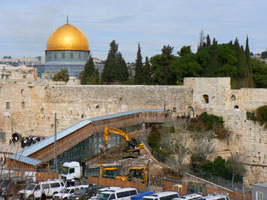 Recent excavations near the Al Aqsa Mosque have brought protests, massive police presence and closures throughout East Jerusalem this week as Muslims claim the Israeli government is violating past agreements to preserve the religious status quo for all holy sites. Rumors and perspectives abound and differ about whether the constuction around the Bab Al-Magharbeh (‘Moroccan’ or ‘Dung Gate’) violates either these past agreements or endangers the structural integrity of any of the structures in the Haram al Sharif, the third most holy site for Muslims. Mystery also surrounds the status of the excavation of tunnels underneath the Haram al Sharif that were begun several years ago and caused widespread outrage in the Muslim and Palestinian communities then. 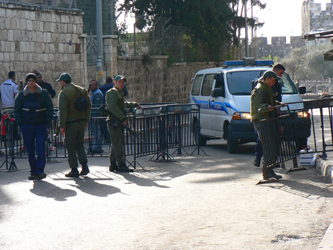 It was rumored that Israeli Defense Minister Amir Peretz has requested the suspension of these excavations due to worries about inflaming an already-tense situation. The communities here cannot help but be reminded that it was a perceived violation of the Haram al Sharif by Ariel Sharon that sparked the deadly second intifada in October of 2000.

Israeli police were out in force and on high alert Friday, the Muslim day of prayer. This week Muslim clerics have asked Muslims, Palestinians and internationals to protest to stop the excavations.