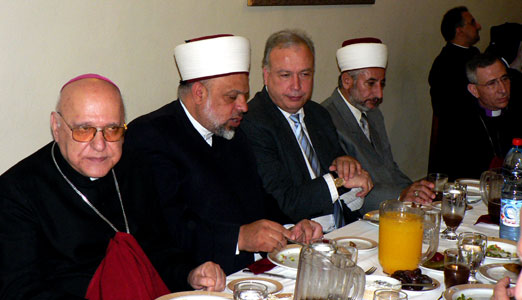 The speakers called for an end to recent tensions between Muslims and Christians, with Sheikh Tamimi recalling the Covenant of Omar in the 7th century which calls for good relations between Muslims and Christians. He recalled that the majority of Christians and Muslims have lived together in peace since then. The speakers agreed that they should work together to see that statements and events outside of this area not affect relations here. All the speakers emphasized the importance of the Holy City of Jerusalem for all, and His Beatitude Michel Sabbah reiterated their common belief that Jerusalem must be shared among Christian, Muslim and Jew and between Palestinian and Israeli. He said these kinds of events are important and must be continued to strengthen community. They also called for unity not only between Muslim and Christian but also among all the Palestinian factions, and urged an end to violence of all kinds.