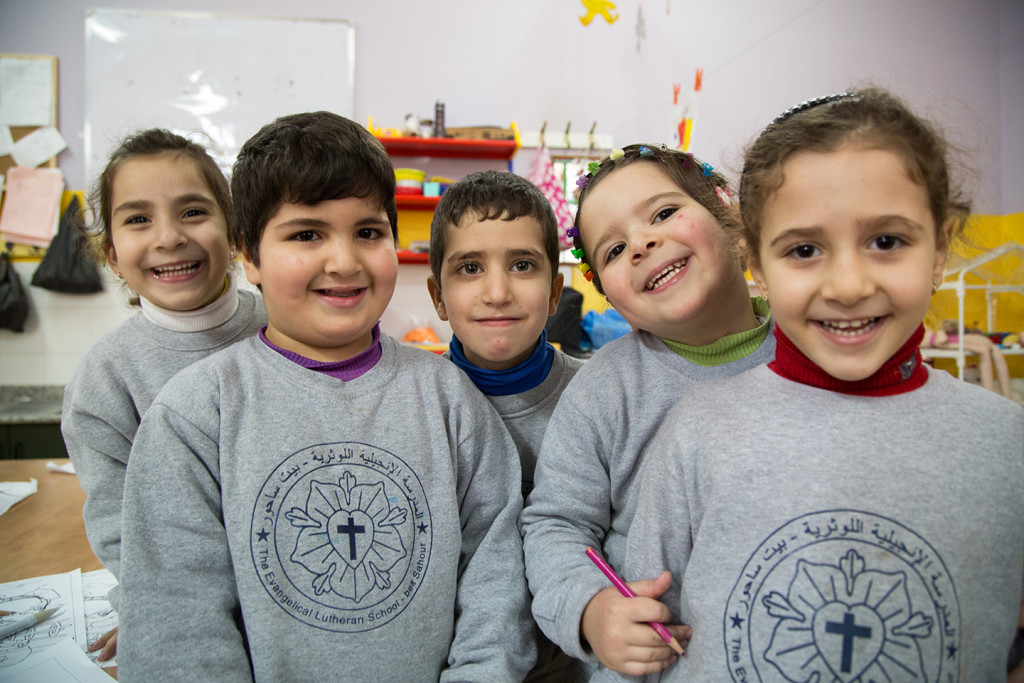 Students from the kindergarten of the Evangelical Lutheran School in Beit Sahour take a break from learning their Arabic alphabet to pose for a photo. Photo: ELCJHL

(LWI) – Rampant religious fanaticism in the Middle East calls Lutherans and other Christians to secure a shared future for all through love and dialogue, said Bishop Dr Munib A. Younan, President of The Lutheran World Federation (LWF).

Younan made these remarks on 19 March, when he delivered a public lecture on “Reformation and Politics” at the Near East School of Theology (NEST) in Beirut, Lebanon. The bishop of the Evangelical Lutheran Church in Jordan and the Holy Land (ELCJHL) emphasized that Lutherans don’t seek to “Christianize” politics but to improve society through engagement.

“Although Christians are numerical minorities in the Middle East, we can have tremendous influence to utilize for the benefit of all persons and communities in our region,” Younan said in his paper focusing on “Lutheran Contributions to the Political Life of the Middle East.”

He was responding to a presentation by Rev. Dr Margot Kässmann, the Evangelical Church in Germany (EKD) special envoy for the 2017 Reformation Jubilee.

“Constitutional development is a central concern for the rebuilding of the Middle East. In that process, Arab Christians emphasize commitment to equal citizenship with equal rights and equal responsibilities,” Younan said.

The LWF president said Lutherans should know that Martin Luther, who triggered the Protestant Reformation 500 years ago, would find the suffering being endured by the people of Iraq and Syria reason to involve himself in such a crisis.

Luther would question the false distinction between religion and politics, promote interfaith engagement, address the Israeli-Palestinian conflict as a factor contributing to the current religiously-sanctioned fanaticism and promote moderation, the bishop noted.

“As a leader from a minority movement himself, Luther would no doubt understand us when we say that our danger is not in living with the ‘Other’ but when fanatics seek to persecute us,” Younan said in his address.

He pointed to the historic document From Conflict to Communion: Lutheran-Catholic Common Commemoration of the Reformation in 2017 to illustrate Lutheran ecumenical accountability, which emphasizes unity, transformation, the power of Jesus Christ and joint witness.

“Together, we show that the church of Jesus Christ is indeed always engaged in reform and renewal,” he said.

The waves of violence that have overtaken the Middle East have disproportionately affected the small Christian communities there, Younan said, adding that all communities are potential victims of the ongoing violence.

“Lutheran reflections on the proper authority of church and government can help shape how all communities in the Middle East move forward toward a shared future,” he concluded.

The ELCJHL bishop is on the board of NEST, an inter-confessional Protestant institution that trains pastors and other church workers in the Middle East for ministry in the churches and their related organizations.

To read the article in it’s original format, you can visit the website of the Lutheran World Federation.
To read Bishop Munib Younan’s entire speech, you can download it here. (Word)