So why celebrate Reformation 500 Day with so few Lutheran students?

2016 was marked by a historical event when the Bishop of the ELCJHL, The Rev. Dr. Munib A. Younan; Pope Francis, head of the Catholic Church; and The Rev. Martin Junge, the General Secretary of the Lutheran World Federation (LWF), co-presided in a Joint-Common Prayer in Commemoration of the Reformation in Lund, Sweden.

Bishop Younan and Pope Francis co-signed a statement that pledged to continue ecumenical cooperation throughout both churches.

Therefore, a school with the richness of religious diversity, such as the ELS, provides an obvious ecumenical and interfaith environment to learn about the Reformation.

“We are not here to convert but to emphasize the importance of knowing what Lutheran Reformation means,” (ELS) Director of Education and Educational Programs Dr. Charlie Haddad told the group of 8th-graders gathered in the Dar al-Kalima Evangelical Lutheran School gymnasium.

“This event distinguishes our schools from the others.”

For the Muslim, the Orthodox Christian, and the Evangelical Christian, the Reformation not only represents a theological occasion, but it represents a social change, Dr. Haddad said to the students and teachers.

“The reformation continues as we reconcile with the Catholic church. All churches should talk about reconciliation within each society,” Bishop Younan said.

Bishop Younan said that to disagree is not a license for intolerance and that if we are truly a reforming church, then we are tolerant of other religions, even when we disagree. He urged the students to keep away from religious prejudice and intolerance.

Dr. Haddad offered a cash reward to the top essays from students themed, What should be reformed in my community today? 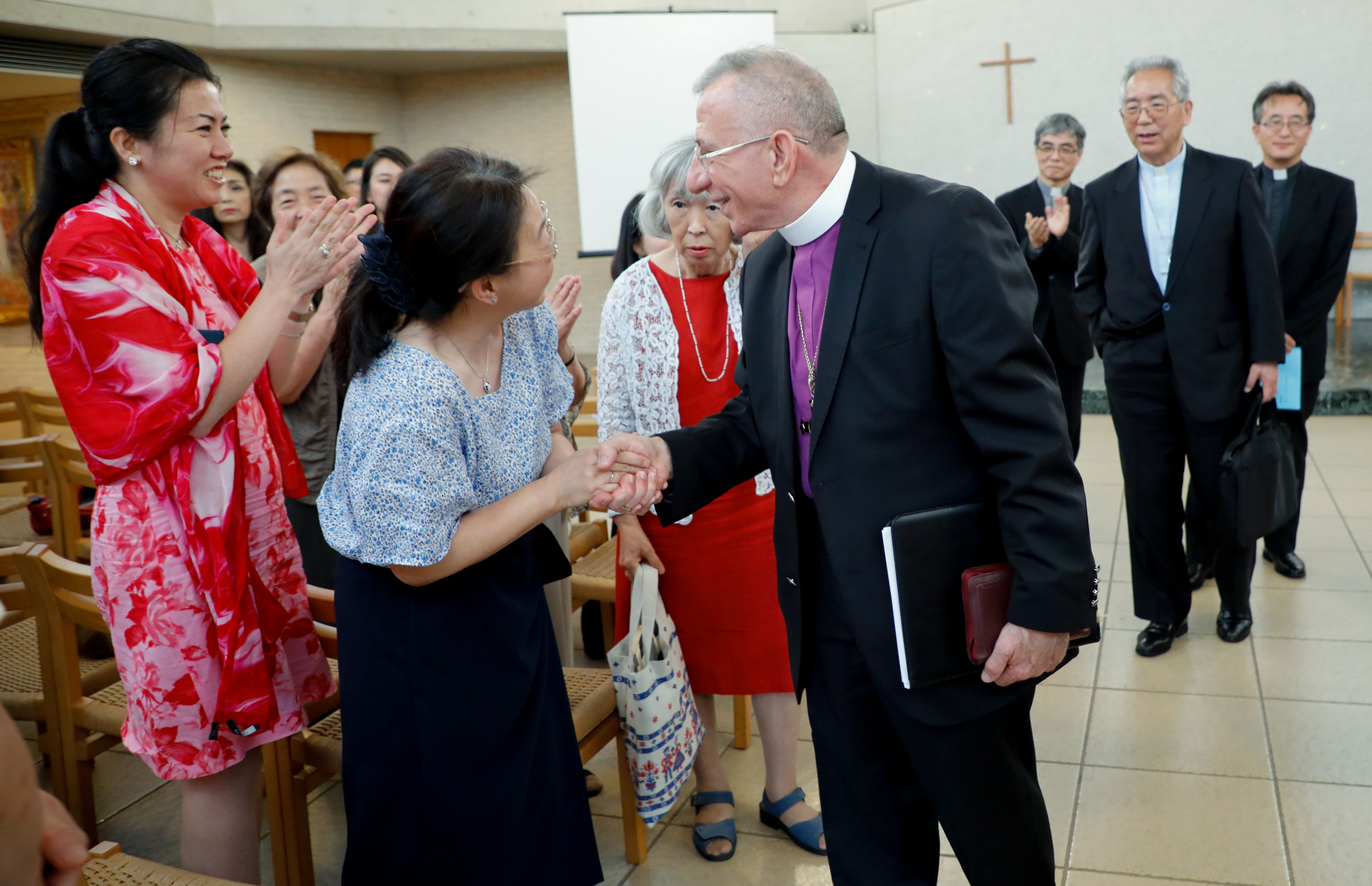 Tokyo, 24 July 2017 – During a visit to Tokyo to accept the Niwano Peace Prize for his interreligious dialogue, Bishop Dr. Munib Younan was invited to deliver an ecumenical address to Japan’s Catholic and Lutheran communities as they prepare to commemorate the 500th year of Reformation and celebrate a Joint-Common Prayer this November, as was done in Lund, Sweden 31 October 2016.

In a historical world event, the Head of the Catholic Church, Pope Francis, Bishop Younan then President of the Lutheran World Federation (LWF), and LWF General Secretary The Rev. Martin Junge met in Lund co-hosted by Sweden to commemorate the 500th anniversary of the Reformation.

Since Lund, some LWF member churches and Catholic churches around the world have been recreating the joint commemoration in their own context.

Gathering in The Chapel of St. Mary at St. Ignatius Catholic Church in Tokyo, The Catholic Archbishop of Tokyo, Peter Takeo Okada and the Catholic Archbishop of Nagasaki, Joseph Mitsuaki Takami together with The Rev. Tadahiro Tateyama, President of The Japan Evangelical Lutheran Church, and Lutheran Pastor Naoki Asano invited members to listen to Bishop Younan speak about the meaning and spirit of Lund.  In his speech to the group of about 125, Bishop Younan said,

“If Lund only remains in Lund and does not infiltrate into the Catholic and Lutheran churches, its meaning will diminish day by day. The more we receive and implement it into our churches, the more energy will be created, just as we experienced today in Tokyo.”

Bishop Younan’s speech was translated into Japanese by Rev. Asano during the speech. 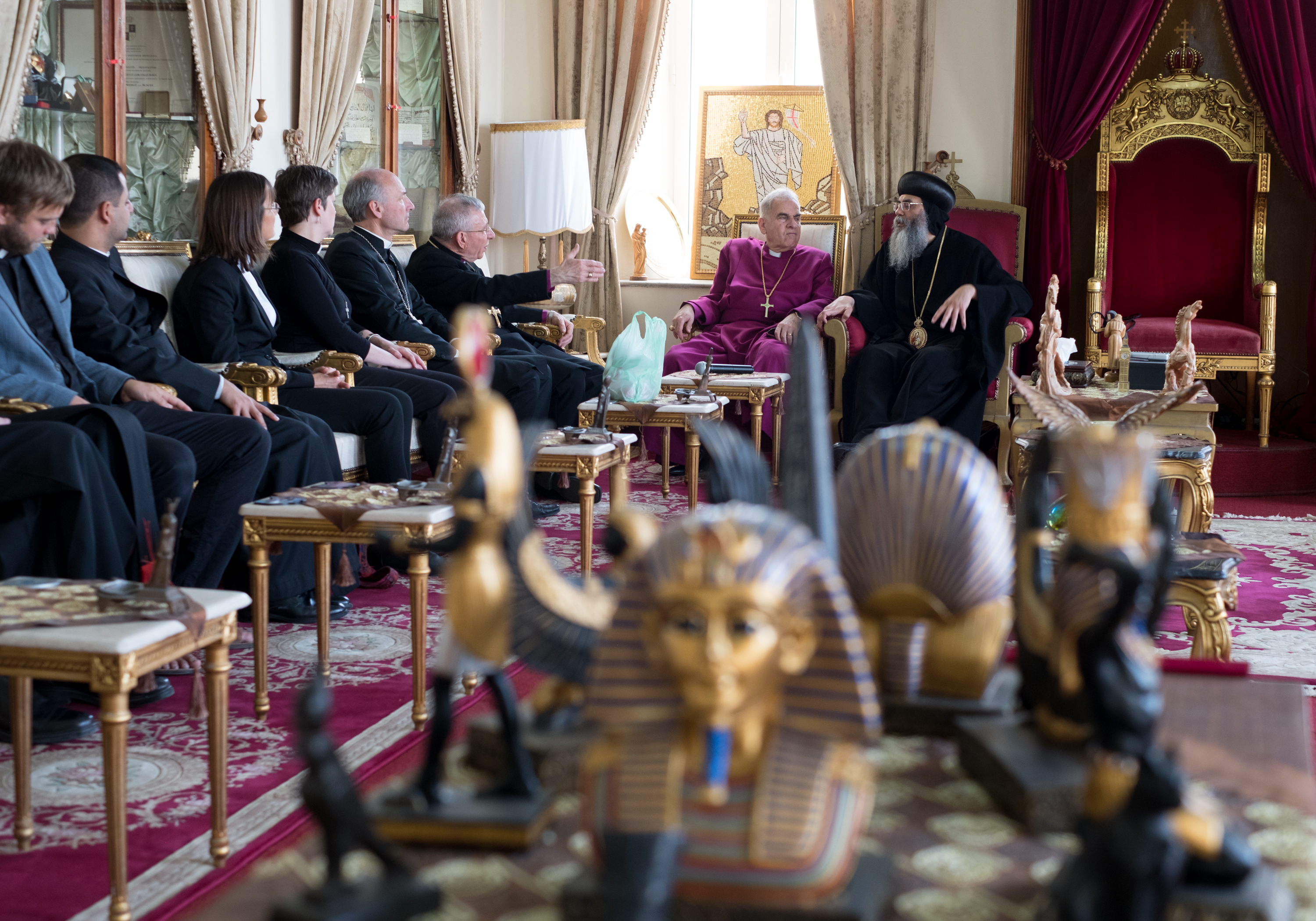 Jerusalem – Orthodox, Catholic, and Protestant Christians all celebrated Easter on April 16th this year. Because each Christian church follows a different calendar, it is rare that the churches celebrate Easter on the same day. Usually occurring once every three years, the next time this is scheduled to happen will be 2025!

Therefore, Easter in the Holy Land this year was a time of calendric unity in celebration and in observance for Christians. This year, the churches also shared in sorrowful prayer after the Holy Week attacks on our Christian brothers and sisters in Egypt. But, in a testimony of unshakable solidarity, the churches drew closer together in the promise of Christ’s life, death, and resurrection, shouting louder praises of Hosanna! He is Risen; He is Risen indeed, Hallelujah!

If you have not had a chance to see the galleries from this remarkable Holy Week, read Bishop Younan’s Easter message, or Pastor Carrie’s sermon on the Mount of Olives at Sunrise Easter service, we’ve compiled them here in one place. 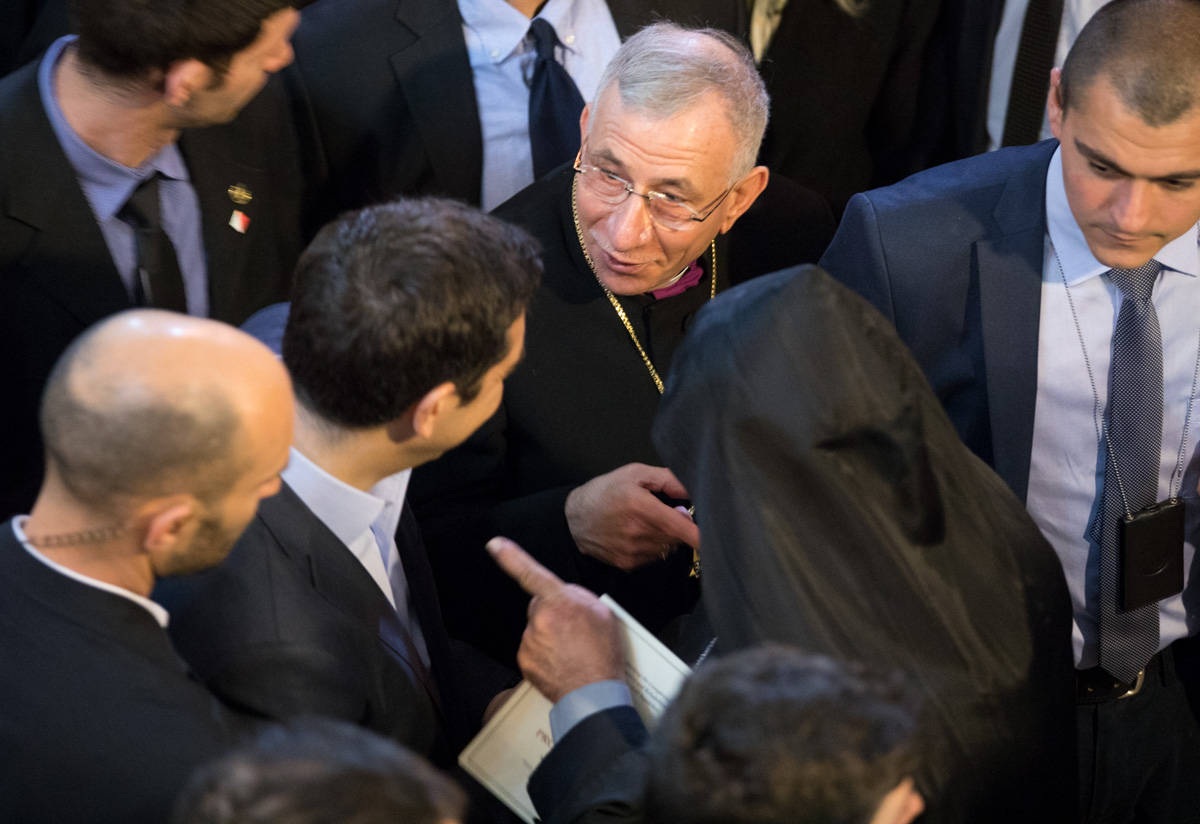 Jerusalem, 22 March – The tomb where Jesus is believed to have been buried is being unveiled again following nine months of restoration work that will be highlighted at a much anticipated ceremony Wednesday.

The shrine, which includes a 19th-century ornate edicule or shrine surrounding the tomb, is a key part of the Church of the Holy Sepulchre in Jerusalem’s Old City.

However, centuries of candle smoke and visiting pilgrims had left it discoloured and almost black.

Parts of it were also coming loose, with warnings that it was structurally unsound and posed a risk to the millions of pilgrims who visit the site every year.

Israeli authorities briefly closed it in 2015 over security fears.

Following a $3.7-million (3.4-million-euro) renovation led by the church’s three main Christian denominations, the tomb has been painstakingly restored to its former glory — including a warm reddish-yellow colouring.

The tomb will be formally reopened on Wednesday in a ceremony in Jerusalem led by religious leaders and donors.

“Before this the monument was black,” chief renovator Antonia Moropoulou told AFP at the site.

“This is the actual colour of the monument, the colour of hope.”

Unlike other parts of the church, which were renovated between the 1960s and 1990s, the edicule had been neglected.

Moropoulou explained that they had systematically dismantled, cleaned and renovated almost all of the edicule, including the columns and upper and inner domes.

A window has been installed to allow pilgrims to see the bare stone of the ancient burial cave for the first time.

The new structural integrity means a protective cage installed 70 years ago by the British is no longer necessary.

“The deformations of the holy edicule are addressed and the structural integrity is assured,” Moropoulou said.

Samuel Aghoyan, the superior of the Armenian Church at the Sepulchre which co-financed the project, said that after the renovation the edicule looked “like a brand new building”.