The Cartoon Controversy has swept the world with still-mounting deaths and uncontained violence. Bishop Younan continues to speak for calm and reconciliation, as in his recent public statement. Controversy also continues within Palestine and Israel over the forming of the new Hamas governement and what it will mean for funds and aid to the Palestinians and for future hopes for peace. It is likely the ELCJHL and other charitable organizations will struggle if and when funds are cut as anticipated. 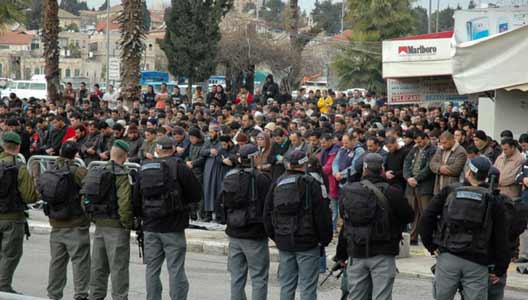 You can tell Fridays here in Jerusalem by the security blimp hovering over the Old City. And by the literally hundreds of Israeli soldiers and many checkpoints on the way into town. This picture – by visiting Pastor Mark Nelson – is from Friday, Feb. 18, during Muslim prayer time. Although peace agreements stipulate that holy sites are to be open to all, the Israeli government regularly prohibits men under a certain age into the Mosque to pray on Fridays, their holy day. Here the Muslims who have been kept outside of their Holy site pray outside Damascus Gate, facing Mecca and a line of Israeli soldiers.