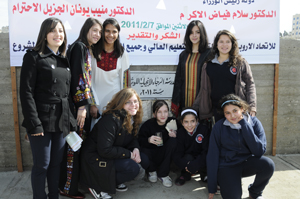 To the right, students from the Evangelical Lutheran School of Hope in Ramallah gather around the new cornerstone laid by Rev. Dr. Munib A. Younan, Bishop of the Evangelical Lutheran Church in Jordan and the Holy Land (ELCJHL); Dr. Salam Fayyad, Prime Minister of the Palestinian Authority; and Mr. Christian Berger, Representative of the European Union Monday, February 7, 2011.

To view more pictures from the event, click here, or click on the photo to the right.

JERUSALEM/RAMALLAH, February 7, 2011 – “This new building builds hope, not only for the Evangelical Lutheran School of Hope, and not only for the Lutheran community, but for all of Ramallah and the Palestinian people,” Bishop Younan said in his words at the cornerstone laying Monday morning for the new school building in Ramallah.

“We have always considered ourselves, as Palestinian Christians, to be an integral part of the fabric of our society, and that means we have a role to play in education and in societal issues in our country. It is part of the mission of our schools that we prepare young Palestinian women and men to seek how they might build their state. We teach our students to respect human rights—especially women’s rights—to respect freedom of religion and to dialogue with other religions. We emphasize peace education in our schools, and the right for each and every person to live in dignity.”

Younan praised this project as a wonderful example of the cooperation of Church and State for the well-being of the whole. This new building project is the joint venture of the Evangelical Lutheran Church in Jordan and the Holy Land (ELCJHL), the European Union (EU), and the Palestinian Authority (PA) Ministry of Education. Younan expressed his thanks to the European Union for its full financial support of this project, and spoke of how he looks forward more such partnerships for the welfare of building a modern civil society. It is the pleasure of the ELCJHL in partnering with both the European Union and the Palestinian Authority Ministry of Education in the building of this school.

Mr. Christian Berger, the European Union Representative, was also on hand for the cornerstone laying ceremony, and said in his speech, “it is a great pleasure to be here, as education is essential in Palestine… The European Union has for many years now has been pursuing two objectives. One of those objectives has been access to education, and this project today is a testimony of that.”

Since its inception, the Evangelical Lutheran School of Hope has been serving the greater Ramallah community regardless of “religion, gender, capabilities, or financial/social status,” and aims to serve “the whole Palestinian society… spreading… values, such as acceptance, love, civic spirit, forgiveness, and openness.”

The Evangelical Lutheran School of Hope, under the present direction of Principal Michael Abu Ghazaleh, continues to grow, and is currently serving 454 students—22% of whom are Christian, 78% of whom are Muslim—and employing 38 teachers and support staff (2010-2011 statistics).

The Evangelical Lutheran School of Hope has been outgrowing its present facilities in recent years, and this new building project will enable Hope to grow to serve more than triple the number of students in the Ramallah area. Besides a new facility, Hope is also looking to expand and grow its educational and extra-curricular offerings in future years.

The Evangelical Lutheran School of Hope has also been a member of the Model Schools Network, a project of Amideast, and is a participant in the present ELCJHL Libraries Project: Opening a World of Possibilities, a project that is seeking to grow English-language libraries for the four ELCJHL Schools through the support of individuals and the partnership of the Global Mission Program Unit of the Evangelical Lutheran Church in America (ELCA), and Wartburg Theological Seminary (WTS) in Dubuque, Iowa.

For more information about the Evangelical Lutheran School of Hope in Ramallah, other ELCJHL Schools and Educational Programs, or the congregations of the ELCJHL, visit ELCJHL’s website at www.elcjhl.org.