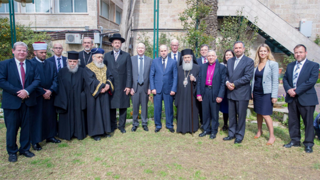 First published in  The Times of Israel by Raphael Ahren

Tel Aviv, 16 March 2017 – Jason Greenblatt, the US administration’s Special Envoy for International Negotiations, on Thursday met with senior Jewish, Christian and Muslim religious leaders in Jerusalem, reportedly calling the meeting “the most important” of his visit.

Greenblatt — a close confidant of US President Donald Trump — hosted the Council of Religious Institutions in the Holy Land (CRIHL) at the US Consulate-General in Jerusalem just before he met for a second time this week with Prime Minister Benjamin Netanyahu.

According to one participant, Greenblatt said the 90-minute encounter, attended by both Israeli chief rabbis and the chief justice of the Palestinian Authority’s Sharia court, was the most important meeting of his weeklong tour through the region.

“The leaders agreed that the search for peace must be governed by respect for life and human dignity for all people; to work together for peace, reconciliation, and a just solution; and to reject all incitement to violence,” said a statement released by the US Embassy in Tel Aviv.

On his Twitter account, Greenblatt said the clergymen were “promoting tolerance.” He said Thursday’s meeting was the first time the council had gathered since 2013, though o, said this was incorrect.

At the same time, CRIHL member Rabbi David Rosen, and interfaith advisor to the Chief Rabbinate, said Greenblatt’s initiative to meet with the council was “historic” in that it marked the first time in recent memory that a senior US administration official engaged in peacemaking efforts asked to meet with the religious leaders.

Greenblatt, an Orthodox Jew, told Rosen that his talks with Netanyahu, PA President Mahmoud Abbas and Jordanian King Abdullah were all very meaningful, but that the gathering with the religious leaders to him was “the most important meeting at all,” Rosen said.

Rosen said he told Greenblatt that would-be peacemakers in the Middle East often believe that religion is the source of the problem and therefore choose to entirely ignore it. But that’s a fallacy, warned the British-born rabbi, who also serves as the AJC’s international director of interreligious affairs.

Bishop Munib Younan, who heads the Evangelical Lutheran Church in Jordan and the Holy Land and is the President of the Lutheran World Federation (LWF), and is a CRIHL member,  told Greenblatt that while religious leaders cannot make peace in the Middle East, it is impossible to make peace without them.

The meeting, which was scheduled to last for an hour but continued a half an hour late, was marked by some heated discussions between Muslim and Israel clergymen over who is responsible for incitement, Rosen said.

“But all agreed that they must work together to combat incitement,” he said. “Everyone agreed that promoting values of sanctity of life, of dignity of the human person, of religious freedom and of the protection of holy sites is something that they must all stand together for.”

Rosen, a veteran promoter of interfaith understanding, said he could not tell whether Greenblatt’s initiative to foster an Israeli-Palestinian peace agreement will have more success than previous such efforts.

“We certainly had enough disappointments here over last decades to warrant a certain amount of skepticism,” he said. “But if we don’t support every possible initiative to bring an end to the conflict, we have our children and grandchildren to answer to.”

CRIHL, founded in 2005, is the “first consultative body representing the highest official religious authorities in the Holy Land (Judaism, Christianity, and Islam),” according to its website.

Greenblatt has been shuttling between Jerusalem and Ramallah for the past few days, meeting with Netanyahu and Abbas and other Israeli and Palestinian top officials.

Greenblatt also met with civilian leaders from both sides. He visited, for instance, Yeshivat Hakotel, a Talmudic seminary in Jerusalem’s Old City. He also spoke to Palestinian youth leaders in the Jalazoun refugee camp near Ramallah “to understand their daily experiences,” as he wrote on his Twitter account.

He also met with a “cross section of folks from Gaza” who gave him “hope we can find solutions to humanitarian challenges while meeting Israel’s security needs,” he tweeted.

Full article: The Times of Israel

Cairo, 2 March 2017 –  A two-day conference in Cairo, Eygpt under the theme of freedom, citizenship, diversity, and integration was attended by Bishop Munib Younan and 65 other religious leaders organized by Al-Azhar University and the UAE Muslim Council of Elders at Al-Azhar Mosque.

The religious leaders were all given the floor during key sessions to speak about their expressions of the Al-Azhar Declaration of Islamic-Christian Mutual Co-Existence, a six-article statement, which condemns violence in the name of religion – any religion. (Bishop Younan’s Speech)

After two days of interreligious dialogue, the meeting held up the statement from Al-Azhar as a model of diverse religions living together.

Article 4 of the statement emphasizes the protection of citizenship and properties and the right to be “citizens” with dignity, and respect of each citizen’s humanity.  Article 4 proposes that these basic statements are the role of the national state, everywhere.

“Arab and Muslim societies have a long tradition in living together with each other by accepting diversity and pluralism,” Bishop Younan said.

Recalling his participation with the Marrakesh Document of 2016, which calls for equal citizenship in the Arab and Muslim worlds, Bishop Younan refuses to use the term minority to describe other religions that are small in number but would rather use the terminology of “citizenship.”

This would be in accordance with the Al-Azhar Declaration of Islamic-Christian Mutual Co-Existence, as well.

50 countries from the Middle East, Europe and, the U.S were present.