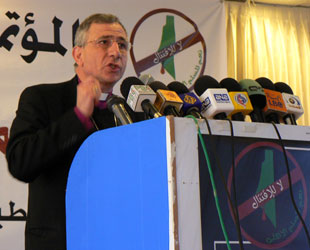 Feb. 10, 2007 – Bishop Munib Younan urged Palestinians to “use brains, sanity, dialogue and non-violence and not arms to deal with differences” at a national conference Monday. The conference, called by independent groups, non-governmental organizations and other agencies, encouraged democratic, non-violent strategies as the only way to achieve Palestinian goals of an end to the 40-year military occupation and the creation of an independent, viable state living side by side with Israel. Banners and stickers at the conference said that Palestine is big enough for all of us and our differences.

The conference started off with Islamic Chief Judge Sheikh Tamimi and Bishop Younan speaking to the 200 people gathered. Bishop Younan told the group that recent infighting between Palestinians “is a sin and a shame on our people” and urged politicians and other leaders to listen to both those who agree with them, to the silent majority and to the voice of the opposition because this is the only way to develop a peaceful, nonviolent strategy for justice and to build a common vision of a modern, civil, democratic society. He urged the victims of the fighting to forgive and not to allow hatred and vengeance to overcome them.

The Bishop has been talking on radio and television and working with Muslim and Christian leaders behind the scenes to try to unite Palestinians toward non-violence and mutual respect in this crucial time of recent infighting, a new unity government and increased tension over recent excavations near the Al Aqsa Mosque.