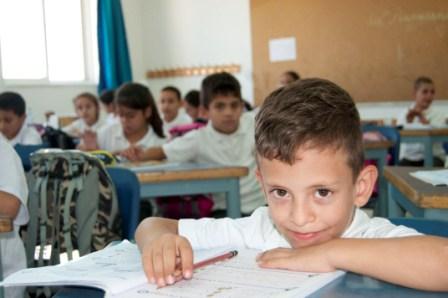 JERUSALEM/GENEVA, 4 February 2011 (LWI) – Classroom and playing field activities at Talitha Kumi Evangelical Lutheran School in Beit Jala, West Bank, are an opportunity for Christian and Muslim students to grow and learn together. This is one of the four schools run by the Evangelical Lutheran Church in Jordan and Holy Land (ELCJHL). In 2011 a total of 2,027 students are enrolled in the ELCJHL schools, representing around 52 percent Christian and 48 percent Muslim.

On the occasion of the first “World Interfaith Harmony Week” (1-7 February 2011) designated by the United Nations General Assembly last October, Rev. Elizabeth McHan spoke with ELCJHL Bishop Dr. Munib Younan, also president of The Lutheran World Federation (LWF) about the significance of this week for the Holy Land faith communities and for the global Lutheran communion.

The proposal for the World Interfaith Harmony Week came out of Jordan. What is the significance of Jordan as the country of this initiative’s birth

Younan: It is very fitting that the proposal for the World Interfaith Harmony Week came out of Jordan, as Jordan is a country in which Muslims and Christians have been living in harmony for 1,400 years. I welcome the initiative of King Abdullah, and hope that this paradigm of Christian-Muslim coexistence should continue to be developed not only in Jordan and in the Holy Land, but also throughout the world.

It is my wish that we Arab-Christians may be of help to those countries in which Islamophobia is growing by sharing how we here in Jordan and the Holy Land live with other religions, working to overcome not only Islamophobia, but also anti-Semitism and anti-Christian sentiments and actions.

How does Lutheran theology speak to religious teachings about tolerance, respect for others and peace across the globe?

Younan: In a time of extremism, the core religious values of love of God and love of neighbor should be promoted. I find that our Lutheran theology of creation and our theology of redemption both speak to this. We are created equally. And we are redeemed equally. Together, these theologies provide a strong basis from which to dialogue with our sisters and brothers in humanity from all religions, while we also have a strong basis from which to deal with any kind of exclusivity, extremism, or superiority complex.

How does the observance of this week relate to the ELCJHL context?

Younan: Our church has a prophetic role in the Middle East. Its prophetic role is to serve our Lord and our neighbor. Our strength is not in our numbers, but in our witness for love, for justice, for hope, for forgiveness, and for reconciliation. This we do through our educational ministries and through interfaith dialogue with Muslims and with Jews, and through the Council of Religious Institutions in the Holy Land (CRIHL), which is comprised of the two chief Rabbis, the Islamic court, the minister of religious affairs in Palestine, and the heads of churches. And for me, as long as the church is an integral part of the fabric of society, it carries in itself a living witness.

What is the significance for the LWF and its member churches?

As the ELCJHL observed this first week, I am convinced that it carries a strong message for our LWF member churches around the world to find the common values that promote justice, coexistence, peace, tolerance, and to work together for the eradication of poverty, the promotion of the role of women, and reconciliation in our world. I call on all LWF member churches to observe this, the first week of February as the World Interfaith Harmony Week in the next years.

To the global human community this week?

Click here to learn more about the World Interfaith Harmony Week and for ideas as to how you can get involved.